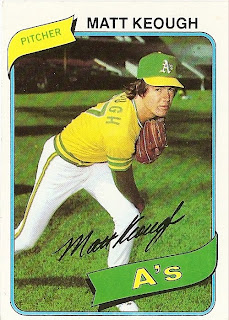 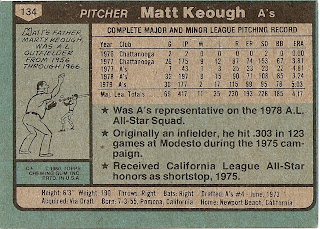 Who is this player?
Matt Keough, starting pitcher, Oakland A's
Before he married a Playmate, before his family appeared on a reality TV Show and before his mugshot appeared on TMZ, Matt Keough was a 24-year old righthanded pitcher that had come into his own in 1980. His 2.91 ERA was fourth best in the league and he pitched an incredible 20 complete games. He settled in as the #3 starter on a revived Oakland club that surprised all of baseball with a second place finish in the AL West. Keough was named Comeback Player of the Year and he and the other young pitchers on the A's were rapidly becoming the envy of the league as 1980 drew to a close.

The son of former big leaguer Marty Keough, Matt was drafted by the A's out of Corona del Mar High School in 1973 as an infielder. He was converted into a pitcher after the 1976 season and made his major league debut less than a year later. He was an All-Star selection in his first full season in the majors (1978) when he was among the league leaders in ERA for much of the first half. While he struggled a bit in the second half, he still finished the year with a respectable 3.24 ERA on an Oakland team that lost 93 ballgames.

The following year, the A's were dreadful, losing 108 games. Keough was particularly effected, tying a major league record by losing his first 14 decisions and finishing the year 2-17. His winning percentage of .105 was the worst recorded by a pitcher since 1916. Keough and the A's enjoyed a resurgence after Billy Martin was hired as manager in 1980. Keough won his first five starts for the 1981 Athletics and appeared on the cover of Sports Illustrated. He began to feel pain in his shoulder in May, and pitched through the pain during a memorable year for the A's as they won the AL West. The A's, however, were swept by the New York Yankees.

The injury caught up with Keough in 1982 and he put up a 5.72 ERA. He walked more batters than he struck out and he led the league in home runs allowed, earned runs allowed, and losses. The following year, he was traded to the New York Yankees but continued to struggle. He voluntarily accepted a minor league demotion in 1984, but was released after the season. He signed with the Cardinals but only made five appearances in 1985 and split the 1986 season, his ninth and final, between the Chicago Cubs and Houston. He was never able to fully overcome the injuries that plagued his career.

Keough spent four years with the Hanshin Tigers and attempted a comeback in 1992 with the California Angels. While sitting in the dugout during a spring training game he was hit in the right temple by a foul ball. The blow caused a life-threatening blood clot, which required surgery and ended his major league aspirations. His personal life of late has been featured on Bravo's "The Real Housewives of Orange County" and his struggles with alcoholism has been tabloid fodder, culminating in jail time in 2008. Currently he is a special assistant to A's General Manager Billy Beane.

Why I love this card
I like a couple of things here. First, I like how the G and H in Keough's last name seem to be seeping off the back of his jersey and down his arm. Second, Keough is all alone at the Oakland Coliseum in this photo. With the outfield clearly in the background, who is he pitching to? He's obviously not on the mound, not even in the bullpen. Did he refuse to be positioned differently? Ah, the wonders...

Something else....
Like 1980 Topps cards, I have fond memories of the early days of MTV, specifically ZZ Top videos. Not because of the music mind you, but the videos. I had no idea that one of the girls in "Legs" was Keough's wife. She's the one in the white outfit and black hat.
Posted by Dean Family at 9:41 PM