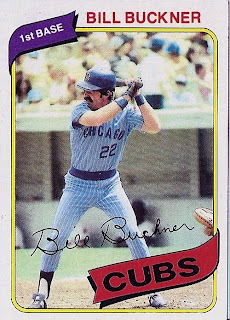 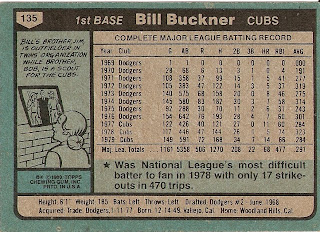 Who was this player?
Bill Buckner, first baseman, Chicago Cubs
Forget "The Curse of the Bambino," for a moment - although it and Bill Buckner is forever intertwined. When this card was new, Bill Buckner was a solid first baseman and one of the more consistent contact hitters in the league. In the summer of 1980, he entered a duel for the NL batting crown with the Cardinals' Garry Templeton and Keith Hernandez. A solid final weekend cinched his first and only batting title. At age 30, "Billy Buck" was a Wrigley Field favorite and had earned his place as one of the National League's best hitters.

As a youngster, Buckner turned down over 60 college football scholarships to play professional baseball. He was the second player chosen by the Los Angeles Dodgers in the 1968 June Draft behind his friend Bobby Valentine. Buckner was an outfielder, but the Dodgers tried him at first base as well, working to fit him into their crowded lineup. He became a regular in 1971 and was known for his competitiveness and fiery temper. He and the Dodgers enjoyed their first taste of the postseason in 1974 when they lost the World Series to the Oakland A's.

Then, on April 18, 1975, Buckner broke his left ankle. It was so serious that it almost ended his career and prompted two operations. He returned in less than a month and his recuperation was slow. After a .243 season, Buckner regrouped in 1976 to bat .301 and steal 28 bases. However, his mobility in the outfield was limited and the Dodgers looked to move him. He was traded to the Chicago Cubs in January 1977 for Rick Monday.

Buckner was converted to first base in Chicago, where he would spend 7 1/2 years. In addition to winning a batting crown, Buckner would lead the league in doubles twice, at bats and was selected to the All Star Game in 1981. He also was routinely one of the hardest batters to strike out in the game. Even though a Wrigleyville favorite, he clashed with management and when Dallas Green took over the Cubs Buckner's days in Chicago were numbered. Midway during the 1984 season, he was traded to the Boston Red Sox for Dennis Eckersley.

Bill enjoyed two full seasons with the BoSox, driving in 100 runs in both 1985 and 1986 and was one of the key members of the 1986 AL Champions. Fate found Buckner during the Series as the famous play in Game 6 made Buckner one of the game's all-time famous goats. Buckner's name became synonymous with the team's failure, and due in part to that, and the fact that he was deteriorating as an everyday player, he was released by the Sox on July 23, 1987. He spent the next 2 1/2 seasons as a part-time player with the California Angels and Kansas City Royals. He returned to Boston for his 22nd and final season in 1990 where he was formally forgiven by the Red Sox faithful on Opening Day.

Why I love this card
I was a Red Sox fan in 1986. Not because I love the Red Sox, but because I did not like the Mets. I prefer to remember Buckner this way during the summer he was a batting champion and not the 15 minutes of stunned silence I spent on that fateful Saturday in 1986. Sorry, it's still a little raw.

Something else....
Although common place today, due to Buckner's severe ankle problems, he became the first major leaguer to sport Nike high tops on the field. I remember these during the World Series and the fuss they made over Buckner's shoes. To me it didn't have the "cool" associated with Nike at the time. It was more like seeing my Dad cutting the grass with shorts and dark socks. Just didn't look right.
Posted by Dean Family at 10:42 PM