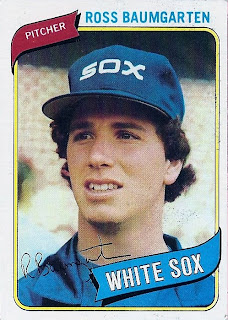 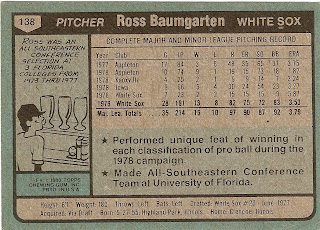 Who is this player?
Ross Baumgarten, starting pitcher, Chicago White Sox
As the 1980 season began, the 24 year old Ross Baumgarten was slated to be the #4 starting pitcher in the Chicago White Sox rotation. He was coming off 13 wins in his first full season in 1979 and he was one of many young arms in the White Sox system. He was featured on the cover of Baseball Digest and pitched a one-hitter against the defending division champion Angels in July. However, 1980 was not kind to Baumgarten as he won only two games due mainly to poor run support and missed a month due to a muscle stain in his back.

Baumgarten's road to the major leagues was a unique one. An heir to a family fortune in furniture stores, a store branch manager was a former minor leaguer with ties to White Sox GM Roland Hemond. Baumgarten was doing well at a junior college in Florida but was not seriously considered a prospect. More or less as a favor, Baumgarten was selected with the White Sox 20th and final draft pick in 1977. In less than a year, Ross was pitching in the major leagues.

He won his major league debut after notching 16 victories in the minor leagues in 1978. His performance earned him a spot in the White Sox starting rotation in 1979. He won his first four decisions en route to the best season of his career. He led all White Sox starters in ERA and also led the team in shutouts. Ross was poised to return in 1981 and was handed the ball in the Sox home opener, an eight inning win over the powerful Milwaukee Brewers.

Baumgarten was again slated to be the #4 starter but lost five of his first six decisions after Opening Day. He lost another month due to injury again and didn't win a game after June 1981. Even worse, he lost the confidence of his manager Tony LaRussa in the process. This led to his trade to the Pittsburgh Pirates shortly before the start of the 1982 season. He began poorly and then lost a month to fractured fingers on his pitching hand fielding a line drive off the bat of Bill Buckner. He didn't win a game, finishing 0-5 in 12 games.

He was released in Spring Training in 1983, but spent the season with the Triple-A affiliates of the A's and Tigers. When he wasn't able to make either major league roster, his five year major league career came to an end. In retirement, Baumgarten found a second career in financial management. In 2008, he was appointed first vice-president and financial adviser at Baird & Warner Holding.

Why I love this card
I was aware of who Ross Baumgarten was well before I acquired this particular card. You just don't forget a name like Ross Baumgarten. From time to time, my Dad and I would pick up a game in the car from out of town. Usually KDKA (Pittsburgh) or KMOX (St. Louis) it was a treat to get a National League game. I don't recall the specifics or even the game, but we were able to pick up a White Sox game and the pitcher was Baumgarten. In the pre-cable days it was special to be able to see or hear a game outside of the local market. I still make the connection to Baumgarten and my Dad's 1978 Buick Riviera.

Something else.....
Back to back, John Castino and Baumgarten. Initially seen as potential stars as the 1980 season opened, both had short careers and then made a name for themselves in the world of finance. Probably made way more money in these jobs than as a ballplayer. Amazing that you can be best remembered for five years of your life and little mention of what happened before and after.
Posted by Dean Family at 10:15 AM