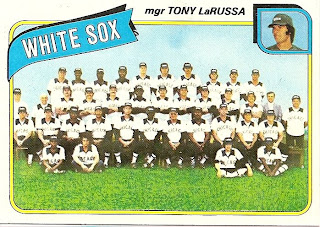 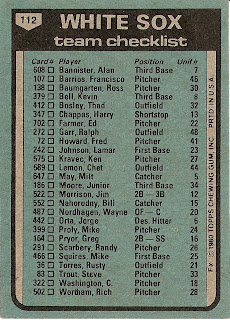 In the midst of the 1979 season, manager Don Kessinger abruptly resigned and was replaced by the young manager of the Iowa Oaks, Tony LaRussa. Under LaRussa, the Sox finished the final 54 games with a .500 record. In 1980, LaRussa's first full season, the White Sox again finished in fifth place in the AL West with a 70-90 record, 26 games behind the division champion Royals.

Not much was expected of the 1980 Chicago White Sox and the didn't fail to disappoint. The made no significant trades or free agent signings during the winter of 1979-80, primarily because owner Bill Veeck did not believe in signing free agents to multimillion dollar contracts. It was becoming increasingly clear that Veeck was looking to sell the club.

The bright side of the South Side was the plethora of young pitching the White Sox possessed, especially lefthanders. The Sox used six pitchers at different times during the season in their rotation, four of the lefthanders and all 28 years or younger. They were led by 21-year old Britt Burns who won 15 games and was third in the league in ERA. The bullpen was led by All-Star Ed Farmer who also finished third with 30 saves and Sox as a team finished third in team saves.

Things were not as promising for the White Sox at the plate. Claudell Washington was traded in June and there were holes at third and catcher. Rookie Harold Baines showed promised in his first season, but Chicago finished last in the league in runs per game. Chet Lemon led the team in average (.292), Jim Morrison in hits, doubles and home runs and Lamar Johnson in RBI.

A highlight of the 1980 season came during the final series when the team activated coach Minnie Minoso. He was activated so that he would become the second player in history (Nick Altrock) to appear in five decades.

Why I love this card
Where was this team photo taken? At the ocean? It certainly doesn't look like a ballpark. LaRussa's mutton chops are pretty sweet too. Have to feel a little bit bad for the batboy on the lower left. Couldn't anyone have given him a hat to wear? Anything to offset those collars.

Something else....
A highlight, if you want to call it that, came in June. With the White Sox hosting the Tigers, Sox pitcher Ed Farmer faced the newly-acquired Al Cowens in the 11th inning of a 3-3 game. Cowens led off the inning by grounding to short. He attacked Farmer, in retaliation for Farmer breaking his jaw with a pitch the previous year when Cowens was with the Royals. Problem was, none of Cowens new Tiger teammates knew what the hell was going on. Farmer eventually filed assault charges and Cowens had to miss a series in Chicago later in the year for fear of being arrested. The charges were dropped and there was a public handshake between the two. When it happened, I remember my Dad saying "Great. We traded for a lunatic."
Posted by Dean Family at 8:45 PM