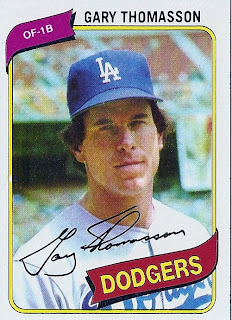 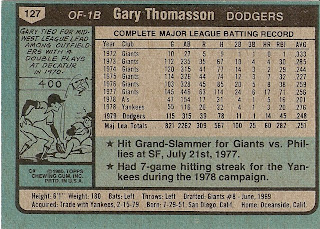 Who is this player?
Gary Thomasson, reserve outfielder, Los Angeles Dodgers
1980 would be Gary Thomasson's final season in the major leagues and he was used primarily by the Dodgers as a pinch-hitter and occassional outfielder. The 28-year old lefthanded batter had several timely pinch-hits early in the season, but slumped in the second half. With several outfield prospects in the Dodger organization, he did not return to the Dodgers in 1981. He played the final game of his nine-year career in the one-game playoff for the NL West against the Houston Astros.

A high school star at Oceanside in Southern California, Thomasson was drafted by the San Francisco Giants in the 1969 amateur draft. A little more than two years later, he was one of the youngest players in the league when he made his major league debut. The following season, he made the Giants roster out of Spring Training, splitting time between the outfield and first base. In his first major league season, he batted a respectable .285.

He spent six seasons in San Francisco, primarily as their fourth outfielder. He appeared in over 100 games in each season from 1973-1977. He achieved career highs in 1977 in games played (145), home runs (17) and RBI (71). With his value high, the Giants included him in a package to the Oakland A's that took Vida Blue across the Bay to San Francisco. Thomasson struggled with Oakland, barely batting over .200 and he was traded to the Yankees in June. He was with the Yankees when they made their historic comeback and appeared in the postseason for the only time in his career. Used as a pinch-hitter and defensive replacement, he won a ring with the 1978 World Champions.

Gary was traded to the Dodgers in February 1979 where he again resumed a role as a fourth outfielder. With the exception of his five months as a Yankee, Thomasson played his entire career with a California team. In 1981 he became the highest-paid player in Nippon Pro Baseball when he signed a three-year, $1.2-million contract with the Yomiuri Giants. He hit 20 home runs (four shy of the League record) and was benched the final week of the year. The next year, he injured his shoulder and knee, effectively ending his professional career.

In his 1993 science fiction novel "Virtual Light," William Gibson defines a "Thomasson," derived from the name of an American baseball player who was a great failure in Japan, as a "useless and inexplicable monument."

Why I love this card
Every now and then, we would bring our baseball cards to school. Since the nuns at St. Peter would take them away if we had them out in class, they were usually relegated to lunch time. And, every now and then, we would pull a prank with one of these cards. I remember Mark LeBara taking completely erasing the "Thom" and "on" Derrick Shaw's Thomasson card. In the days before Photoshop, Mark did a helluva job erasing and whitening it out so it would read "GARY ASS". Derrick was mad, but to a bunch of fourth graders, it became legendary.

Something else....
While in Japan, the media dubbed Thomasson, "The Giant Human Fan." You just don't see nicknames like that, well..ever.
Posted by Dean Family at 11:54 PM