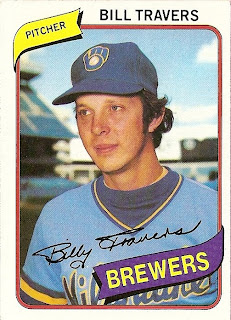 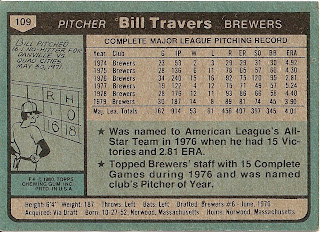 Who is this player?
Bill Travers, starting pitcher, Milwaukee Brewers
The left-handed Travers was the #4 starter in the Brewers' rotation in 1980. A year before, he had won 14 games and was ninth in his league with a .636 winning percentage. He was a dependable control pitcher that provided the Brewers with a second solid left-handed starter behind staff ace Mike Caldwell. He had a similar season in 1980, winning 12 games and eighth in winning percentage. The Brewers, however, slipped to third in 1980 after finishing second the previous year.

A product of New England, Travers was selected by the Milwaukee Brewers in the 1970 amateur draft. As he told the Boston Globe in 2004:

''I remember coming home from Nantasket Beach with [girlfriend and future wife] Linda when my mother came running out of the house to tell me I had been drafted by Milwaukee," Travers said. ''I said, 'Who in the hell are the Milwaukee Brewers?' Before I know it, Bill Enos is at my house telling me all the good things that are going to happen. When he gets my name on the contract, he turns and says, 'Now I'll tell you about all the bad things.

He made his major league debut in 1974, primarily as a long reliever. Inserted into the starting rotation in June the following season, he was dependable yet unspectacular. Travers had a breakout season in 1976 when he won ten games in the first half and was selected to the AL All Star Team. His season was interrupted when he contracted Legionnaires disease when in Philadelphia for the All Star Game.

An injury derailed his 1977 season, but he returned in 1978 to win 12 games. Travers was also known and liked by his teammates for his sense of humor and his ability to keep the clubhouse loose with practical jokes. He was granted free agency after the 1980 season and he signed a contract with the California Angels in January of 1981. Recurring arm troubles ended his 1981 season after only four appearances and wiped out the entire 1982 season as the Angels faced his old team, the Brewers in the ALCS. He attempted to comeback in 1983, but was ineffective and was released in July and his nine year career had come to an end.

After retiring from baseball, Travers has had a second career as a professional candelpin bowler.

Why I love this card
When I got this card, my Dad also introduced me to the actor of the same name, the star of "Born Free." When I asked him about this Travers, he mistakenly thought I meant the actor. For a while, I thought they were both the same guy.

Something else....
In August of 1977, Travers became the only pitcher in the expansion era (post 1961) to allow 14 earned run in a single game. With a depleted pitching staff during a stretch of doubleheaders, Travers absorbed 18 hits and 14 runs in a 14-5 Brewer defeat.
Posted by Dean Family at 9:38 PM