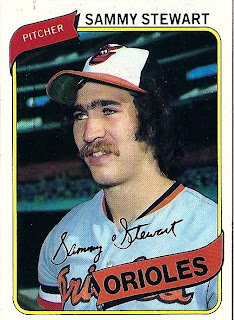 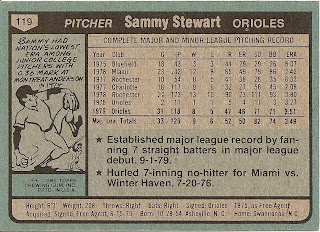 Who is this player?
Sammy Stewart, relief pitcher, Baltimore Orioles
When the 1980 season began, Sammy Stewart had just completed his first full season in the major leagues. The hard throwing righthander was the setup man for an Oriole team coming off of a World Series appearance. Stewart was seen as one of the best young arms on an Oriole team that was loaded with quality pitcher. He returned to a setup role in 1980 and could be counted on to occasionally start.

Today, the tale of Sammy Stewart is a sad one. After throwing his final pitch in 1987, Stewart's life spiraled out of control. He became addicted to crack cocaine and has been arrested 26 times since 1989. In between, he lost a son to cystic fibrosis and in 2006 was sentenced to at least six years in prison for being a habitual offender. A great article summarizing Stewart's fall from grace can be found here.

Things weren't always so bleak for Sammy Stewart. Signed as an amateur free agent in 1975, he made a splash in his major league debut. Pitching the second game of a double-header, he set a major league record by striking out seven consecutive hitters in his debut. His effort was rewarded with a role in the Orioles bullpen.

Stewart was such a reliable reliever that in 1981 he qualified and finished second in the American League ERA race. That performance earned him more starting assignments and in 1982, he achieved a career high in games started. The Orioles were nipped in the AL East race on the final day of the season. In 1983, he returned to the bullpen and helped lead the Orioles to the World Championship. His strikeout of Mike Schmidt in the seventh inning of Game 3 is considered the Series turning point for the Orioles.

As the Orioles decended in the standings, Stewart still maintained his presence as quality setup man. He lead the Orioles in appearances in 1984 & 1985 and notched 22 of his 45 career saves. For the 1986 season, he was traded to the Boston Red Sox and they promptly won the Amercian League pennant. Curiously, Stewart was not used in either the ALCS or the World Series that year, something Stewart blamed on a personality conflict with manager John McNamara. He signed a free agent contract with the Cleveland Indians for the 1987 season, and he posted the worst ERA of his career. When he was released that October, his 10-year major league career had come to a close.

Why I love this card
I had forgotten that Stewart's eyes in this card creeped me out as a little kid. I know that its the camera angle and all that, but his right eye just looked really different from his left. When we would get this card in packs we would all feign fear with little kid "Aaaahs!"

Something else....
This is the second time that there has been a back-to-back Oriole and Pirate. I don't think that it was deliberate that Topps was featuring 1979 Series players but it is an odd coincidence. I need to check the blog to see if there are any similar trends featuring other teams.
Posted by Dean Family at 10:55 AM