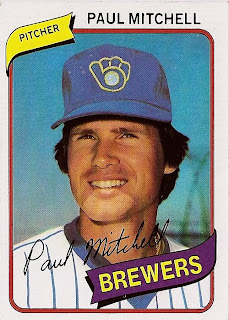 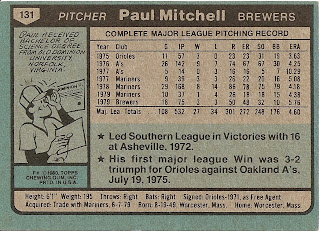 Who was this player?
Paul Mitchell, starting pitcher, Milwaukee Brewers
In the final season of his six-year major league career, Paul Mitchell was called up from Triple-A Vancouver in June and eventually inserted into the fifth spot in the Brewers' rotation. He pitched well for the Brewers, going 5-5 with a 3.53 ERA, the highlight being a four-hit shutout August 17 against the Cleveland Indians.

A native of Worcster, MA, Paul Mitchell grew up a Yankees fan idolizing Mickey Mantle. The righthanded Mitchell pitched at Old Dominion University and was drafted by the Orioles with the seventh pick of the first round in 1971. He was a big winner in the Baltimore chain and after a 10-1 start in 1975 at Triple-A Rochester, he was called up to the Orioles, where he made his debut against the eventual league champions.

Before the start of the 1976 season, Mitchell was part of the blockbuster trade that sent Reggie Jackson from the Oakland A's to Baltimore. Mitchell, meanwhile, was inserted into the Oakland rotation. He had a horrible start, but won eight of 12 after Memorial Day to finish the season with a winning record. When he started poorly again in 1977, Oakland demoted him to the minors and in August, sold him to the Seattle Mariners. Mitchell would finish the season in the starting rotation, going 3-3 with a high 4.99 ERA.

In 1978, Mitchell was the leading winner on a team that lost 104 games. While he only won eight games, he led the club in starts, shutouts and innings pitched. The personal highlight of the '78 season was likely was shutting out the Yankees at Yankee Stadium in the midst of the AL East pennant chase with Boston. The following year, he was traded to Milwaukee in mid season and pitched primarily as a swingman. When the Brewers obtained Pete Vuckovich during the 1980-81 off season and when Mitchell had a poor Spring Training in 1981, he was released. He never again appeared in the major leagues.

Why I love this card
My goodness, look at Mitchell's hat. I had mentioned in an earlier post about some of these caps resembling stove-pipe hats. Mitchell's hat here is so huge, it almost doesn't seem real. In fact, I suspect that this card was airbrushed from Mitchell's 1979 Spring Training in Seattle. While the Brewers logo looks great, it appears somebody really overdid it with the blue.

Something else....
Don't do a google search on just "Paul Mitchell." You'll get two pages of hair care/hairdresser websites before you run into this Paul Mitchell. No correlation, by the way.
Posted by Dean Family at 1:35 PM