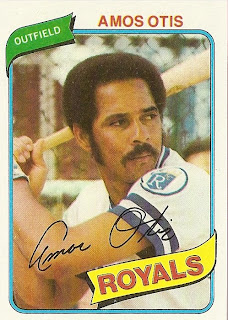 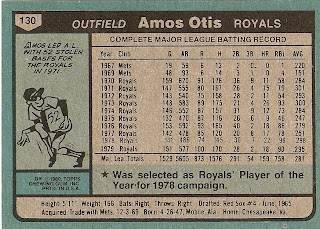 Who is this player?
Amos Otis, centerfielder, Kansas City Royals
Entering the 1980 season, Amos Otis had already completed 10 seasons in a Royal uniform. At that moment he was synonomous with the team and considered the franchise's finest player. While the Royals would win their first league pennant that season, Otis' production dropped. He suffered a hand injury in Spring Training and did not play until Memorial Day. However, the reliable Otis came alive in the postseason, hitting .333 in the ALCS against New York and .478 with three homers with the nation watching. Unfortunately, Otis' Royals fell to the Phillies in the World Series in six games.

Otis was initially drafted by the Boston Red Sox in 1965 as a shortstop. However, he put in some time in the outfield, third base and first base while playing in the minors. In November 1966, the Mets drafted him and jumped him all the way to Class AAA for 1967. He saw some time with the Mets late in the 1967 season, but spent 1968 in AAA again before making the major league roster for 1969. However, Otis immediately clashed with Mets manager Gil Hodges, who tried to make him a third baseman. After only four games, he was sent back to the minors.. At the end of the season, the Royals sent a hot prospect at the time, Joe Foy, to the Mets, in exchange for the young Otis.

Amos would flourish as a Royal. He immediately was selected to the All Star Game in 1970 and would represent Kansas City five times in that capacity. He would also lead his league in doubles in 1970, a feat he would repeat in 1976. In the early part of the decade, Otis was consistently an MVP candidate, hitting over .300 twice, leading the league in stolen bases (1972) and winning three gold gloves. He was the centerpiece that the Royals built around as the Royals developed into a contender. Led by Otis, Kansas City would win the AL West for the first time in 1976.

He injured his foot in the first inning of the first game of the ALCS as the Royals lost a tight series to New York. They would win the division again in 1977 & 1978 only to again lose the ALCS to the Yankees. Otis meanwhile, continued to produce at a high level for the Royals, driving in 90+ runs in 1978-79, scoring 100+ runs in 1979 and consistently playing in 140+ games. Often described in the media as "brooding" or "moody" Otis' tenure in Kansas City was largely unappreciated outside of his hometown.

Outside of an outstanding 1982 season, his offensive production began to slip and he lost a step in the outfield, losing his center-field job to Willie Wilson. When the 1983 season ended he left the Royals as a free agent and played one season with the Pittsburgh Pirates before ending his 17-year major league career. He was elected to the Royals Hall of Fame and has been active with the Royals RBI program.

Why I love this card
I distinctly recall looking at this card sitting on a parking block outside the local 7-11 that sold Topps cards. Otis' pose was truly unique. So often in little league we had safety preached to us and you did not approach the plate without a helmet. Seeing Otis taking batting practice without a helmet on? It instantly made Otis cool in our minds and it was a topic of discussion in that parking lot. In later years, we would call something like that bad ass.

Something else...
As young teammates and friend on the New York Mets, Otis and Nolan Ryan developed a friendly rivalry when the faced each other. One such incident is recalled here, along with a great iterview with the man alternately known as "A.O." and "Famous Amos"
Posted by Dean Family at 11:22 PM