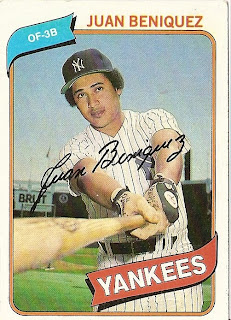 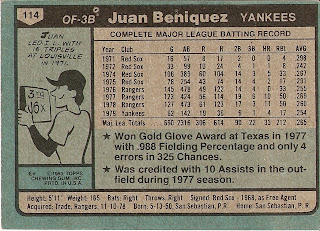 Who is this player?
Juan Beniquez, reserve outfielder, New York Yankees
By the time the 1980 season began, Beniquez was already gone from the Yankees, as part of a six player deal that ultimately brought Ruppert Jones to New York. Beniquez only appeared in 62 games in 1979 as injuries limited his playing time. He was slated to be the full-time centerfielder in Seattle, but a shoulder injury in Spring Training put him on the sidelines until June. He slumped at the plate and his frustration boiled over when he was suspended by the team in September for insubordination.

One of the most well-traveled players of his generation, the righthand hitting Beniquez broke into the majors as a shortstop with the Boston Red Sox in 1971. The following season, he established a modern major league record when he committed six errors in two consecutive games, prompting the Red Sox to convert him to an outfielder. After a year in the minors, Beniquez won the centerfield position in 1974, and promptly lost it the following year to Fred Lynn. As the fourth outfielder in 1975, Juan hit .291 and appeared in the 1975 postseason for the American League champions.

Short of starting pitching, the Red Sox traded Beniquez to the Texas Rangers for future Hall of Famer Ferguson Jenkins. He was immediately inserted into the Rangers lineup as their everyday centerfielder. In 1977, he was recognized for his defensive abilities when he was awarded the Gold Glove. He also finished in the top ten in stolen bases that season. He achived career highs in home runs and RBI in 1978 but the Rangers never advanced to the post-season. He was traded to the Yankees prior to the 1979 campaign.

It was in Anaheim that Beniquez enjoyed his longest term with one team. Playing with the Angels for five seasons, he was a member of the Angels 1982 division champions. He also began a transition from a defensive specialist to a consistent .300 hitter. After never hitting higher than .291, starting in 1983 he went for .305, .336, and .304. In 1984, he set career highs for OBP (.370) and slugging (.452), and even finished 25th in the MVP voting. He was granted free agency and signed with the Baltimore for the 1986 season. On June 12th he had his greatest singular game when he hit three homers in one game. Despite hitting .300 he was on the move again, traded this time to Kansas City for the 1987 season.

He lasted only half a season in Kansas City before he was acquired by the Toronto Blue Jays for the 1987 stretch drive. His bases loaded triple in a late season game against Detroit gave Toronto a 3.5 game lead over the Tigers in the AL East with eight to play. However the Blue Jays would soon blow that lead, losing their final 7 games of the season while Detroit won 6 of its last 8 to take the division by 2 games. Beniquez played his final season in 1988 wrapping up a 17 year career with eight different teams.

Why I love this card
Hard to believe but this card is the first appearance of the bat-at-the-camera shot. Beniquez looks as if he's going to swat the "Yankees" pennant. In a different era, this shot was fairly common on a baseball card, but by 1980 it wasn't as employed as often. And what's up with his name printed so prominantly on both his batting gloves? Was Ruben Rivera hanging around the Yankee clubhouse even then?

Something else....
In 2008, an ebay listing offered the actual bat used by Bernie Carbo in the 1975 Series. The listing proported that it was the bat Carbo used to hit his famous game-tying home run in Game 6, the precursor to Carlton Fisk's home run. What does this have to do with Beniquez? The bat in the listing was a Juan Beniquez model. Carbo has since questioned the authenticity of the bat.
Posted by Dean Family at 10:15 PM