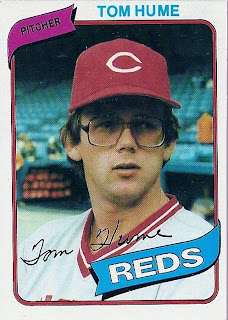 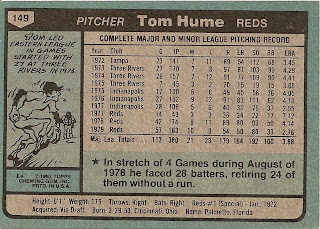 Who is this player?
Tom Hume, closer, Cincinnati Reds
While he may not look the part, Tom Hume was one of the best relief pitchers in baseball in 1980. In what was the best year of his career, Hume won nine games and finished a league-leading 62. His 25 saves was second-best in the National League and he was the co-winner of the Sporting News' Fireman of the Year award (with Rollie Fingers). His performance was a major reason the Reds contended most of the season in the NL West. While Cincinnati did not repeat as division champions, the 27-year old Hume solidified the Reds' bullpen.

Tom Hume's road to the major leagues was a long one. A native of Cincinnati, Hume was drafted by the Reds in 1972 and spent five years honing his craft in the minor leagues, Mexican League and the Florida Instructional League. His debut was inauspicious and he struggled for a season and a half as part of the Reds staff. When the Reds hired manager John McNamara, Hume's career blossomed.

Being used exclusively out of the bullpen during the second half of the 1979 season, Hume helped lead the Reds to the NL West crown by recording 15 saves over the last 10 weeks of the season and finishing runner-up to J.R. Richard with a 2.76 ERA. Tom followed up his Fireman of the Year season by having another solid outing in the strike shortened 1981 campaign, compiling a 9-4 record with a 3.46 ERA and chalking up 13 saves.

Hume was off to a fast start to the 1982 season, heading into the All-Star break 3rd in the National League with 16 saves. Hume was named to the National League All-Star team and recorded the save for the NL in a 4-1 victory. Hume injured his knee and made his final appearance of the 1982 season on July 26. He never regained the same status that he enjoyed as one of the games elite closers. Two lackluster seasons (1983-1984) also saw him lose his closer's role with the Reds.

Hume rebounded in 1985 with a solid season as a setup man in the Reds bullpen, but he was dealt after the season to the Philadelphia Phillies. Hume had another good year in 1986, going 4-1 with a 2.77 ERA in 46 appearances. Tom slumped, however, and in 1987 he was dealt back to the Reds in mid-season, finishing where he started and completing a 11-year career. He was the Reds bullpen coach for 11 seasons (1996-2006) before he was broomed by incoming manager Dusty Baker.

Why I love this card
Hume is clearly shown here at Tiger Stadium. A bold photo by Topps. This was very surprising at the time when we got this card - seeing a National Leaguer pictured an AL park in the days before interleague. The Reds and Tigers played each other in an annual exhibition called the Kid Gloves Game where the proceeds would go to Sandlot baseball in Cincinnati and Detroit. It began in 1974 and ended sometime in the late 1980s. Here's a shot of the Big Red Machine in the mid 1970s (notice the Detroit auxiliary scoreboard in the background): 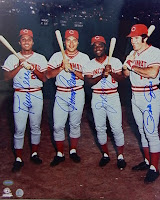 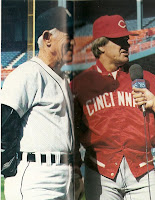 Something else....
When Johnny Bench decided to retire midway through the 1983 season, the first person he told was Tom Hume after the two went to see the movie Blue Thunder in Pittsburgh. I remember seeing this on ESPN reported by the late Tom Mees. Summer vacation had just started and I was allowed to stay up later with school out. I think I woke my Dad up just to tell him. He didn't share my excitement.
Posted by Dean Family at 11:51 AM