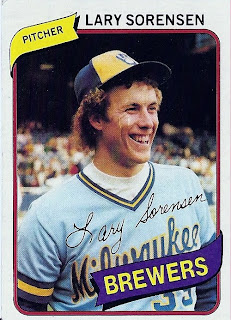 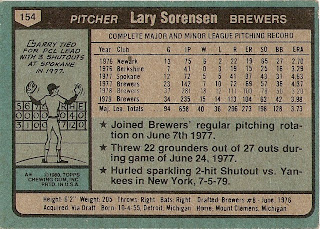 Who is this player?
Lary Sorensen, starting pitcher, Milwaukee Brewers
Beginning 1980 as the Milwaukee Brewers #2 starting pitcher, Lary Sorensen was to be one of the reasons the Brewers were expected to contend in the AL East after their second-place finish in 1979. Sorensen won 12 games in 1980, but the Brewers did not live up to expectations and finished in a distant third. Lary's personal 1980 highlight was his consecutive shutouts in September against the Twins and Angels. At the end of the season, he was part of a blockbuster deal between the Brewers and St. Louis Cardinals. The Cardinals thought so highly of Sorensen that they sent Rollie Fingers, Pete Vuckovich and Ted Simmons to Milwaukee.

A graduate of L'Anse Creuse High School near Detroit, Sorensen starred at the University of Michigan, twice being named to the All Big Ten team. The Brewers selected him on the eighth round of the amateur draft in 1976. In less than a year, the righthanded Sorensen was in the major leagues. He entered the starting rotation in June 1977, and he won seven games. The following year, he won 11 times in the first half of 1978 and was named to the All Star team, where he pitched three scoreless innings against the NL's best. It later proved to be the best season of his career, winning 18 and placing fifth in complete games and innings pitched.

Lary put together another solid year in 1979, winning 15 games and leading the Brewers in starts, complete games and innings pitched. After his trade to the Cardinals, he split 14 decisions and was traded again, this time to Cleveland. It was later learned that Sorensen was using cocaine during in 1981 and he became a journeyman, pitching for three teams (Indians, A's, Cubs) in four years, never regaining the promise of his All Star season. He was suspended as a result of the Pittsburgh Drug Trials and did not appear in the majors in 1986.
Sorensen pitched two more years (1987-88) with the Expos and Giants before finishing his 11-year career. After his playing days, the demons of addiction began to claim Sorensen. Over a 12 year period, he would be arrested six times for drunken driving and have his driver's license suspended nine times and revoked four times. In the process, he lost his marriage, friendships and his job as a broadcaster for the Detroit Tigers.

In early 2008, Sorensen was found by police unconscious in his car in a ditch. He had a .48 BAC and alcohol poisoning. One expert said that half of the population would die with a BAC that high. Amazingly, Sorensen never injured himself or anyone else with his drunk driving. He remains on parole with numerous conditions that can be found here.

Why I love this card
Like some of the other players on this blog, Sorensen was another local boy-makes good story when I was growing up. When my Dad's buddy Buster retired from Chrysler and opened a Stroh's Ice Cream parlor, he claimed that Sorensen "came in all the time." Eventually it became Sorensen's "uncle" and Buster always promised to get me an autograph. In fact, I think that I left a double of this card (and possibly a 1981 Topps) at the store just in case. Needless to say, it never got signed. And yes, Buster was his real name.

Something else....
Apparently, Sorensen lives near me although I am not positive where. As part of his parole assignments, he worked at a McDonald's five miles from my me and at a storage facility within walking distance from my house. I really need to keep my eyes open. His son Mark, pitched for Michigan State and is currently a prospect with the Tigers organization. Here is an interview Lary did in August of 2009.
Posted by Dean Family at 10:38 PM