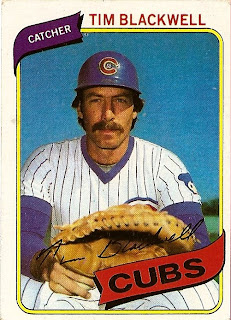 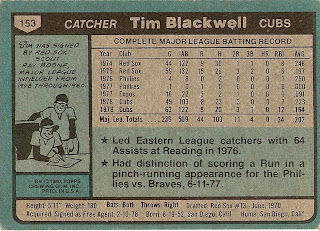 Who is this player?
Tim Blackwell, catcher, Chicago Cubs
As I was opening 1980 rack packs, Tim Blackwell was enjoying his only season as an everyday catcher. With Barry Foote suffering back injuries, Blackwell was the Cubs' Opening Day catcher. While always a good defensive player, Blackwell worked tirelessly with Cubs legend Billy Williams to improve his offensive skills. Indeed, his 1980 season average was 50 points higher than his career mark. He achieved career highs in nearly every offensive category in 1980 with a season highlight coming in September when a ninth inning single derailed the playoff-bound Houston Astros.

As a high school prep star in San Diego, Tim Blackwell was scouted by former All-Star Ray Boone and was free agent draft choice by the Boston Red Sox in 1970. He became a full-time catcher in 1971 and worked his way through the Red Sox minor league system. When Red Sox starter Carlton Fisk went down with injury in 1974, the righthand hitting Blackwell was called up from Triple-A Pawtucket. Tim split playing time with veteran Bob Montgomery for the remainder of the year and he batted .246 in 44 games.

Blackwell was a member on the 1975 American League pennant winners, but hit only .197 in 59 games. He did not appear in the postseason and was expendable with Fisk as the starting catcher. In Spring Training 1976, he was sold to the Philadelphia Phillies and spent most of the season with Triple-A Reading. A little over a year later, Blackwell was part of a multi-player trade with the Montreal Expos. He appeared in only 16 games with Montreal and batted a meager .091.

He came to Chicago as a free agent in 1978 and served mainly as a backup for two seasons, providing excellent defense. He struggled offensively but took full advantage of his promotion in 1980. His performance earned him the Cubs starting position in 1981. His batting average returned to his career level and at the end of the season signed a free agent contract returning to the Montreal Expos. There, he resumed a backup role, this time to another future Hall of Famer Gary Carter.

He spent the final two seasons of his ten year career in Montreal. He signed a free agent contract with the California Angels in 1983, but spent the season in the minor leagues. He then began the second stage of his baseball life with a long career as coach and manager. He was the manager of the St. Paul Saints and most recently, managed the Winston-Salem Warthogs in the Chicago White Sox chain.

Why I love this card
The are a couple of great things here. First is Blackwell's pose and the positioning of his signature - it looks as if he is catching it with his mitt. Secondly, the #52 on the "C" in Blackwell's helmet has always perplexed me. In 1980, I was happy with my Dad's explanation that 52 was merely his number. I found out later that it wasn't and what's worse, there doesn't appear to be a #52 on the Cubs roster during Blackwell's Chicago tenure. I wonder if he just grabbed the nearest helmet during Spring Training?

Something else....
Much of the information for this blog entry is taken from John Vorperian's excellent bio of Blackwell at the SABR website. You can read the entire entry here.
Posted by Dean Family at 11:45 PM