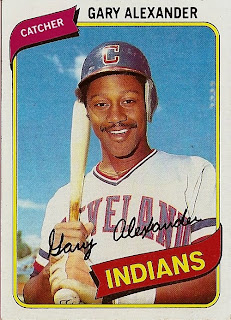 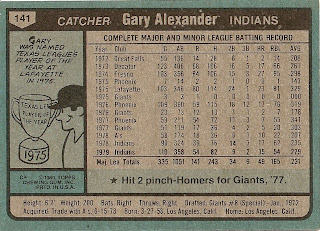 Who is this player?
Gary Alexander, catcher then designated hitter, Cleveland Indians
The free-swinging Alexander figured prominently in the Indians 1980 plans. He had a poor year defensively in 1979 and lost the starting catching position to Ron Hassey, but the Tribe thought enough of his bat to find a place for him in the lineup. Indeed, he was the Indians cleanup hitter and DH on Opening Day. However, he was soon pushed to the bench upon the ascension of rookie Joe Charboneau and his own propensity to strike out. He was relegated to occasional DH, pinch-hitter and third string catcher. His 1980 highlight was likely a home run against the Yankees that gave the Tribe a victory before a large crowd on helmet day.

Gary Alexander was a righthanded hitter that was selected out of high school by the San Francisco Giants in the second round of the 1972 amateur draft. With Decatur in the Midwest League in 1973, Alexander gave an example of things to come, finishing third in home runs (17) and first in strikeouts (126). He also began to learn the catching position in an effort to make the major leagues sooner. As a result, Gary was given a brief look at the end of both the 1975 and 1976 seasons. Even though he was in a handful of games, he was behind the plate when John Montefusco threw a no-hitter on September 29, 1976.

A red hot start to the 1977 season at Triple-A Phoenix earned Alexander and early promotion to the Giants in June and he batted .303 in 53 games. That performance earned him a spot as catcher on the Topps 1977 All Rookie team. He was slated to be the Giants everyday catcher in 1978 but was part of a seven-player package traded to the Oakland A's for pitcher Vida Blue. Alexander quickly established himself as the standout of the group, hitting 10 home runs the first two months of the season and landing a Sporting News cover in the process.

Shortly after his cover story, he was traded again, this time to the Cleveland Indians, where he likely achieved his greatest fame. He hit 17 home runs with the Tribe in '78 and finished the season with 27 home runs which was good for ninth in the AL. He also led all of baseball with 166 strikeouts, a prodigious number for its time. Alexander became a fan favorite with the Indians and in 1979, hit game-winning homers in two games in May. Alexander never hit for a high average in his AL days, never batting higher than .235.

However, Alexander's defense behind the plate began to slip as he led all AL catchers with 18 errors and allowed 80 stolen bases by enemy runners. Although he finished with 17 home runs in '79, he also struck out 100 times in just 358 at bats. These developments were enough to convince Indian management to move Alexander from behind the plate to the DH spot in 1980. When he struggled again to bat .200 in 1980, the Indians included him in a trade to the Pirates for Bert Blyleven. He appeared in only 21 games and batted .213 for the Bucs in 1981, the last season of his seven-year career.

Why I love this card
Alexander's 1980 card reminds me of the first ever baseball book that I owned - The 1980 Complete Handbook of Baseball. My Dad bought me this at the old B&Dalton bookstore in Eastland Mall. It had little bios of all the players and Alexander's confused me. It said his nickname was "Sleepy" (no explanation given) and quoted him saying he didn't care if he struck out 100 times for the next 10 years as long as he got his 25 home runs. Funny that he didn't do either as he was out of the game the following season.

Something else.....
as a kid, I always confused Gary Alexander with Matt Alexander. They both played for the A's and Pirates, but that's about it in terms of similarity. Also, I couldn't find anything in my research about what Gary Alexander is up to these days, but I got his autograph through the mail a few years ago, so I thank him for that.
Posted by Dean Family at 9:26 AM