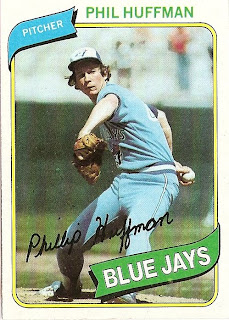 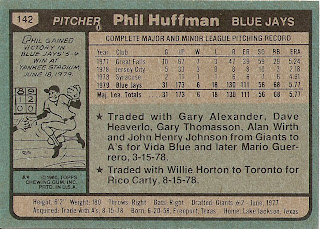 Who is this player?
Phil Huffman, starting pitcher, Toronto Blue Jays
As a rookie in 1979, Phil Huffman was a workhorse on a Blue Jays team that lost a league-leading 109 games. Over the winter, the Jays made numerous changes, including the hiring of Bobby Mattick as manager. The righthanded Huffman was on the bubble to crack the new-look Jays rotation. On the final day of Spring Training 1980, he was optioned to Triple-A Syracuse, where he went 3-9 in 15 starts for the last-place Chiefs.

Drafted out of Brazoswood High School in Texas, Huffman was original a prospect of the San Francisco Giants. He was drafted in the second round of the 1977 draft but spent less than a year in the organization when he was part of a package traded to the San Francisco Giants for Vida Blue. He spent only five months in the Oakland organization when he was traded once again, this time with Willie Horton to Toronto in exchange for Rico Carty.

It was with the pitching-starved Blue Jays that Huffman would receive his major league break. In only their third season, the Toronto franchise was in their infancy. Huffman made the squad out of Spring Training and was penciled in as the #4 starter. The season began well, for Huffman as he won in his major league debut. It was also Toronto's first win of 1979. After a rough outing his next time out, Huffman won again to raise his record to 2-0. Things went downhill from there, however, as Phil lost 11 of his next 13 decisions and had difficulty getting his ERA under 5.00.

Huffman's 1979 highlight undoubtedly was his August 27th one-hitter against Oakland. However, Phil finished the 1979 campaign 6-18 with a 5.77 ERA. While he was second on the team in starts and innings, his 18 losses led the league and remains today the franchise record. Huffman remained in the Blue Jays minor league system until he was traded to the Kansas City Royals for Rance Mullinks in 1982. He bounced around the minor leagues with the Royals, Mets and Orioles organizations with moderate success through most of the early & mid-1980s.

He made his return to the majors in 1985, appearing in two games with the Baltimore Orioles. He never appeared in the major leagues again. He was a fixture with the Rochester Red Wings in the mid to late 1980s, playing there for three years before finally retiring after the 1989 season. Huffman settled down in Rochester where he lives today. He got a job with the demolition crew responsible for razing Rochester's Silver Stadium, and while I am not certain, I am pretty sure this is him today, working with Jackson Welding Supply. I mean, how many Phil Huffmans can there be in Rochester???

Why I love this card
Interestingly, Huffman has a 1981 Topps card despite not appearing in a big league game in 1980. I love the fact that his full name "Phillip Huffman" is the signature pictured making it all the more formal. Through the magic of retrosheet.com, I am pretty sure Huffman is shown here during a June 9, 1979 game against Oakland, a 5-0 win. Good that Topps pictured him during a winning outing.

Something else....
The 1978 Vida Blue trade has been very popular so far in this blog. Outside of Blue himself, four of the seven players traded for him have been featured. Huffman, Gary Alexander (back-to-back!!), Mario Guerrero and Gary Thomasson. I won't spoil the surprise by revealing the other three, but there's nothing earth shattering to report. It is interesting to note that three of the four players would not be on the A's roster in 1980.
Posted by Dean Family at 11:56 PM