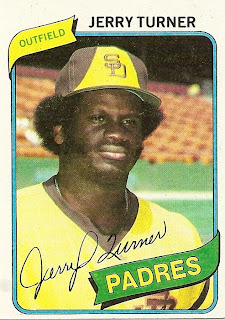 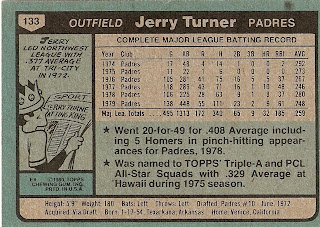 Who is this player?
Jerry Turner, reserve outfielder, San Diego Padres
After spending most of the 1979 season as the Padres' everyday left fielder, Jerry Turner's playing time was reduced when San Diego acquired Jerry Mumphrey. Turner was effective in his role as pinch-hitter, ranking among the league leaders with 13 pinch-hits. He finished the year with a .288 batting average and two of his three home runs that year came off the bench. He also stole home twice. His 1980 season ended in August due to an injury.

An All-State baseball player in high school, the San Diego Padres selected him in the tenth round of the June 1972 free agent draft. Turner spent four seasons in the minor leagues, appearing briefly with the Padres in 1974 and 1975. After joining San Diego in September 1974, he batted .292 in 17 games and .273 in 11 games the following season.

Turner emerged among the top rookie outfielders in the league in 1976, when he appeared in 105 games and batted .267. He was second on the team in triples and stolen bases and had an eight game hitting streak in May. The following season, he produced more power with 10 home runs and 48 RBI. He primarily split left field duties with Gene Richards and led the team with 15 pinch-hit RBI. He batted even better as a pinch-hitter in 1978. Jerry had 20 pinch-hits a .408 average as a pinch hitter, five HR and 19 RBI. He fell short of the all-time record for pinch hit home runs in a season, primarily because he was inserted into the lineup the final month of the season.

His 1978 performance earned him his first and only season as a regular in 1979 when he knocked in a career-high 61 runs and set personal records in nearly every offensive category, but his bating average dipped to .248. After Turner batted .226 in 33 games in 1981, the Padres sold him to the Chicago White Sox on September 9. He spent 1982 with the Detroit Tigers, mainly as a DH and rejoined the Padres for his tenth and final season in 1983. During this decade, Turner served as a coach on the independent Orange County Flyers, a team part-owned by "Wheel of Fortune's" Pat Sajak.

Why I love this card
Outside of the fabulous mutton chops Turner is sporting, you are almost blinded by the amount of yellow on this card. Turner's hat, warmup even the flags on the cards just jump out at you. Secondly, I remember the Topps Rookie Teams, but have no recollection of Triple-A teams referred to on the back of Turner's card.

Something else....
Longtime Padres announcer Bob Chandler wrote in his book "Tales from the Padres Dugout" about Turner:

Jerry was playing left field at San Diego Stadium against St. Louis when the Cardinals loaded the bases. The next batter hit a clean single to left that Turner fielded on one hop and started to throw home. In mid-throw he changed his mind and decided to throw to third base instead. In the process of changing his mechanics, Jerry threw across his body, and the ball flew down the left field line toward the San Diego bullpen. Fans were stunned to watch Turner run down his own throw in the bullpen as Redbirds flew around the bases. Jerry asked me later how I called the play on the radio. I didn't know what to say....