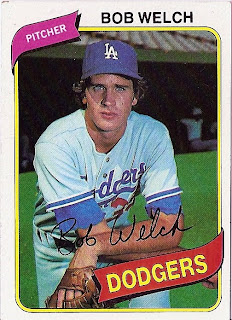 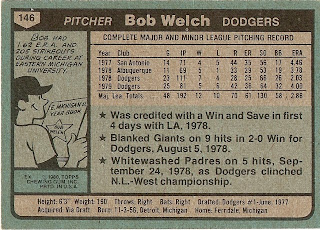 Who is this player?
Bob Welch, starting pitcher, Los Angeles Dodgers
The most important event in Bob Welch's life in 1980 did not come on a baseball field. Welch confronted a problem with alcoholism and spent January and February 1980 at a treatment clinic. Relying more on off-speed pitches, he won six consecutive decisions in April & May including a one-hit performance against the Atlanta Braves in which he faced the minimum 27 batters. Welch was selected to the All Star Game in July at pitched three innings in relief at Dodger Stadium. Even though he missed the last week of the pennant race to injury, Welch blossomed into a solid starter in 1980, winning 14 games and finishing with a 3.29 ERA.

A righthanded flame-throwing product of Eastern Michigan University, Welch was the number one draft selection of the Dodgers in 1977. As a rookie the following season, Welch gained national notoriety when he dramatically struck out Reggie Jackson to end Game Two of the 1978 World Series. Unfortunately, the Dodgers lost the Series in six games. Welch's rookie season was split between starting and relieving, both of which he did well. The sudden stardom eventually led to Welch's alcoholism and his performance suffered in 1979. A Sports Illustrated article about his struggle can be read here.

With his personal problems addressed, Welch became an important figure in the Dodger rotation. Bob made key relief appearances in all three Dodger wins in the 1981 NLCS, including a save in the pennant clinching Game 5. He also appeared in the World Series as the Dodgers earned their revenge against the Yankees. He also authored a book about his alcohol struggles, Five O'Clock Comes Early: A Young Man's Battle With Alcoholism, that was released in 1982.

In his ten year Dodger career, Welch won 115 games and posted a 3.14 ERA. He helped the Dodgers reach the playoffs four separate times. He consistently found himself among the National League leaders in victories and earned run average and led the Senior Circuit with four shutouts in 1987. He also pitched two more one-hitters as a Dodger, one in 1983 and another in 1987. At the end of the 1987 season, he was one of the principals in a huge three team trade that sent him to the Oakland Athletics. He settled in nicely as the #2 starter in Oakland as the A's went to three straight World Series, winning a championship in 1989.

1990 would prove to be the best statistical season of Welch's career. En route to the American League Cy Young Award, he won 27 games, the most in the last 37 years. He was also named the AL starter in the All Star Game and appeared in the World Series for the fifth time. Welch slipped to 12-13 in 1991 and the toll of six straight seasons of 200+ innings began to show. He missed significant time with injuries, in 1992 and posted a 5.29 ERA in 28 starts in 1993. He made his final appearance on August 11, 1994, the day the players went on strike, ending his 17-year career. In 2001, he was a member of the Arizona Diamondbacks coaching staff when they won the World Series and pitching coach for the Netherlands in the World Classic.

Why I love this card
It makes me think of a lost autograph opportunity. Sort of. It was the early 1980s and our elementary school had its sports banquet. A "special guest" was advertised but was never named. Since Welch was from the the Detroit-area, it was him. I immediately thought of this card when I saw him as it was the only Welch card I had at the time. I had no idea what alcoholism was but he scared the crap out of me when he recounted his experiences. He ended up signing the back of the program for me here. To this day, I still have nightmares about someone signing autographs someplace and I can't find something to get signed. I guess the therapy hasn't worked.

Something else....
I didn't realize that there was a movie version of Welch's book, Comebacker: The Bob Welch Story made in 1988. I also didn't realize that Welch was the third winningest pitcher of the 1980s behind Jack Morris and Dave Stieb.
Posted by Dean Family at 10:49 PM