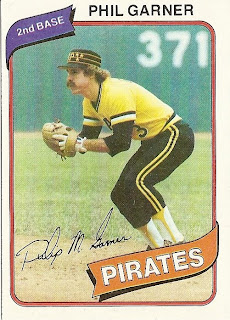 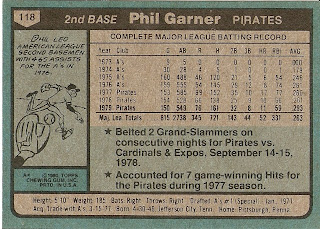 Who is this player?
Phil Garner, second baseman, Pittsburgh Pirates
"Scarp Iron's" career was at its peak at the time this card was making the rounds. The second sacker of the defending World Champions, he was coming off a 1979 season where he batted .293 during the regular season and an incredible .500 (12 for 24) in the World Series. Had it not been for Willie Stargell's heroics, Garner would likely have been the MVP. He was on the cover of Sports Illustrated, and his solid play earned him an All-Star selection in 1980. While he didn't match his offensive output of 1979, Garner had cemented his reputation as one of the better second basemen in the National League.

Born the son of a Baptist minister, he was an honorable mention All-American in 1970 and was originally drafted by the Montreal Expos. However, the Expos scout did not offer him a contract and he instead played semi-pro ball in Kansas. He got his break the following year when he was selected third overall by the Oakland Athletics. Originally a third baseman, he was a September call-up to the 1973 A's and played nine games, primarily as a defensive substitute. As Sal Bando was still holding down the A's job at third base, Garner had little hope to join the team. Although he had a contract squabble with owner Charlie Finley, he got a break in late May when Bando went down with a bruised calf for a few games.

In 1975, the righthand hitting Garner filled the A's opening at second base and he lead the league by playing in 160 games. Typically batting ninth, he hit .246 as the A's won their fifth and final AL West title of the 1970s. Oakland would lose in the ALCS to Boston. The following season, Garner was selected to represent the A's in the All-Star Game, raised his batting average almost twenty points and was second in the AL in triples. That offseason, he was sent to Pittsburgh in a blockbuster trade, where he split time between third and second. When the Pirates acquired Bill Madlock via trade in 1979, Garner was shifted to second for the remainder of his time in Pittsburgh.

In 1981, he was selected to the All-Star team for the second straight year, but was traded at the deadline to Houston for Johnny Ray. In Houston, he moved back to third base and helped lead the Astros to the postseason in 1981 and 1986. In Houston, Garner filled the role of dependable veteran who could come through in the clutch. In 1987, he took a pay cut to remain in Houston, but at age 38 the end was near. He was traded to the Los Angeles Dodgers midway through the 1987 season and batted only .190. His 16-year career came to an end the following season as a San Francisco Giant.

Almost immediately, Garner began the transformation into his second baseball career. He was a coach with the Astros from 1989-1991 and was named manager of the Milwaukee Brewers in 1992. Although he stayed in Milwaukee for seven seasons, the Brewers never posted a winning record with Garner at the helm. He then managed in Detroit (2000-2002) and Houston, leading the Astros to their only World Series appearance in 2005. He was fired during the 2007 season and replaced by Cecil Cooper. His number was retired by his Alma Mater (Tennessee) in 2009.

Why I love this card
My Dad is originally from the Pittsburgh area, so 1979 was a good year to be a Pittsburgh fan. Originally, I gravitated to Willie Stargell and Dave Parker since they were the superstars of the team. My Dad pointed out Garner to me. He said that while superstars like Stargell and Parker are important, it is guys like Garner that a winning team needs - a guy that does the little things to help a team win and can come through in the clutch. When Garner hit .500 in the World Series, it was proof to a nine year old that old Dad was right. I continued to follow Garner and players like him to this day and this card reminds me of that.

Something else....
In 1978, Garner became the first National Leaguer in 77 years (Jimmy Sheckard), to hit grand slams in consecutive games. In the non-performance enhancement era, that was pretty impressive for a middle infielder like Garner.
Posted by Dean Family at 4:31 PM