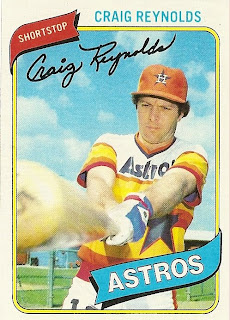 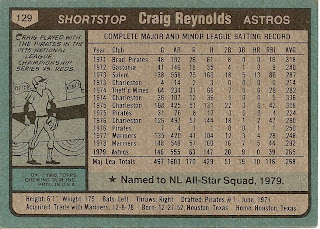 Who is this player?
Craig Reynolds, shortstop, Houston Astros
Known primarily for a solid glove, Craig Reynolds was already a two-time All Star as the Astros marched towards the NL West flag. In 1980, Reynolds was mired in a long slump that saw him batting under .200 for much of the season. His light-hitting saw him occasionally benched in an effort to infuse more offense into an already weak Astros lineup. He picked it up after August 1, batting .268 the rest of the way and rapped three hits in the one-game playoff as the Astros defeated the Los Angeles Dodgers to win the division.

Reynolds attended Houston Baptist University after a spectacular baseball and basketball career at Houston's Reagan High School. He was a first round selection of the Pittsburgh Pirates in 1971. A consistent if not overpowering hitter during several seasons in the minors, he batted only .225 in a handful of games with the Pirates in 1975 and 1976 before being traded to the Seattle Mariners. He was the Mariners first ever shortstop during their inaugural year of 1977.

The following season, he found his stroke offensively and was hitting .320 at the end of June, good for fourth in the league. His bat earned him a selection on the 1978 AL All-Star Team. At the end of the season, Craig was traded to the Astros for pitcher Floyd Bannister. Reynolds made the All-Star team again in 1979, this time on the NL squad. Coincidentally, the game was played in Seattle and he received a standing ovation from his former hometown fans. Reynolds was on the field when the NL closed out a 7-6 win at the Kingdome.

Reynolds led the National League in 1979 with 34 sacrifice hits, a feat he would accomplish twice more in his career, in 1981 and 1984. In 1981, he led the National League in triples as Houston once again made the playoffs, but lost in the divisional series. He lost his starting position in 1982 to Dickie Thon, but when Thon was seriously beaned in early 1984, Reynolds returned to the starting lineup. He was there in 1986 as the Astros again won the NL West. Craig would hit .333 in the NLCS against the Mets, but unfortunately, the Astros lost in six games to the New York Mets.

Reynolds was in the Opening Day lineup for the Astros five times in his career, and is second all-time in franchise history for games played at shortstop. He retired after the 1989 season and 15 seasons in the major leagues. He is still remembered fondly as the shortstop during one of the greatest periods in Astros history. Today, he actively practices his faith by preaching in the Houston area. His testimony can be found here.

Why I love this card
Are you kidding? What an awesome shot! While admittedly not a fan of the posed shot, staring down end of Reynolds bat is pretty neat. A creative take on an old standard baseball pose. Bonus points that its a guy like Reynolds posed this way and not a Winfield, Foster, Luzinski et al. Extra bonus points for putting Reynolds signature in the sky behind him and not getting in lost in the photo itself.

Something else...
Seattle traded Reynolds to make room in the lineup for Mario Mendoza. Frightening to think that's how bad the Mariners were during this era. Reynolds also retired with a career ERA of 27.00 in two appearances, in 1986 and 1989.
Posted by Dean Family at 10:48 PM