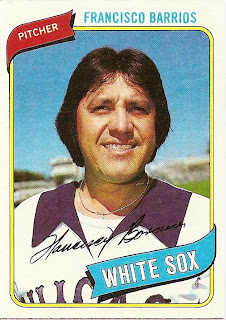 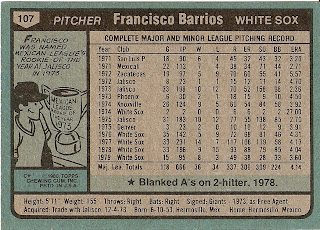 Who is this player?
Francisco Barrios, starting pitcher, Chicago White Sox
As part of the White Sox rotation, Barrios was leading the team in victories when a shoulder injury ended his season in July of 1979. It was later determined that he suffered a rotator cuff injury and had surgery to repair the damage when the season was over. He was brought along slowly in 1980, not making his first start until May 13th, but the injury persisted. He made only three appearances the entire year, going 1-1 with a 4.96 ERA.

The Mexican League Rookie of the Year in 1973, Barrios signed originally as a free agent with the San Francisco Giants that summer. In less than a year, he was traded to the Chicago White Sox and made his major league debut. He spent the entire 1975 season in the minor leagues and earned a spot on the pitching staff in 1976 as a swingman. He won five games, completed six and had three saves. The highlight of his season undoubtedly came on July 28th when he combined with Blue Moon Odom on a no-hitter.

The 1977 season was a memorable one in White Sox history as the "South Side Hitmen" thrilled fans with a divisional title run before fading in late summer. Barrios was the young ace of the staff, winning 14 games while leading the team in innings pitched, games started, and complete games. At 24 years old, Barrios' future seemed bright. As the White Sox were depleted by free agency, Barrios was a dependable starter but not as successful in 1978. Although he finished 9-15, he still led Sox starters in ERA, complete games and shutouts.

Barrios was never able to recover from his torn rotator cuff. It was a different era and the surgery was primitive by today's standards. He attempted yet another comeback in 1981, beginning the season in the White Sox rotation before the shoulder began to act up again. From there, Barrios' season and life began to spiral out of control. First, he was arrested after a brawl with teammate Steve Trout. He was arrested a second time after a fight in a bar and in August, had a warrant issued for his arrest when he failed to appear in court on a cocaine charge.

Before the season ended, the controversy proved too much for the White Sox who released him. He entered a rehab facility for drug and alcohol rehabilitation and the Brewers were interested in him in 1982. He was invited to Spring Training but he never responded to the Brewers invitation. Less than a month later, he suffered a fatal heart attack from an accidental drug overdose. He was only 28 years old.

Why I love this card
Barrios is pictured without his hat. This is only the third card to have a player without his hat. Topps had come a long way from the sets of the late 1960s and early 1970s when nearly half of the cards had players without hats.

Something else....
Out of the first 98 cards, there was only one player who is deceased. In the last nine cards, there are three deceased players, two in Mexico.
Posted by Dean Family at 11:24 PM