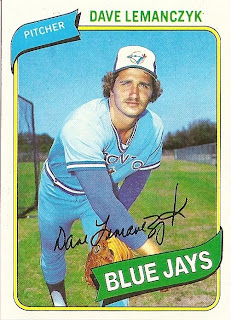 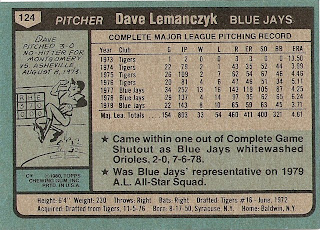 Who is this player?
Dave Lemanczyk, starting pitcher, Toronto Blue Jays
Entering the 1980 season, Lemanczyk had been a mainstay in the starting rotation of the Blue Jays since their inception. He was the Jays Opening Day starter for the second time in his career, but was chased in the first inning. His pitching did not improve drastically and he began the season with a 2-5 record. On June 3rd, he was traded to the California Angels. As a swingman for the Angles, he appeared in 21 games, posting a 4.32 ERA. He was released by the Angels at the end of the season, which would be the last in his eight year career.

Dave Lemanczyk made his major league debut less than a year after being selected by the Detroit Tigers in the 1972 draft. He would only make one major league appearance in 1973 as the 22-year old righthander needed more minor league seasoning. He returned to the parent club in mid-1974 as a relief pitcher and had moderate success with a poor Tiger team.

He would continue in that role with the Tigers for the next two seasons, occassionally starting, but also posting a high ERA in 1975 (4.46) and 1976 (5.09). After his disappointing season, the Tigers did not protect him in the expansion draft and he was selected by the Toronto Blue Jays. He was immediately inserted into the starting rotation and was given the ball in the team's second-ever game. He won a career-high 13 games and logged 252 innings, but the first-year Jays lost 107 games and Lemanczyk led the league in earned runs allowed.

After a horrible (4-14, 6.26) 1978 season, Lemanczyk rebounded in the first half of the 1979 season. He threw a one-hitter in April and was among the league leaders in ERA. He was rewarded by being Toronto's All-Star representative. He slumped to begin the second half and was lost for the final two months of the season with a leg injury. He attempted to catch on with the New York Yankees in 1981, but was unsuccessful.

He now currently operates a baseball school for young athletes in Long Island and also served as a private pitching coach. One of his former students, Craig Hansen is currently pitching with the Pittsburgh Pirates.

Why I love this card
I remembered Lemanczyk being a lot better than he actually was. Must be the All-Star thing. What I really loved though, is the amount of blue in this photo. While I'm not a fan of the posed action shot, the blue sky as a backdrop to Lemanczyk's jersey looks really cool. Bonus points for the sleeves being the same color. Double bonus points for not taking the time to move the pitching net/screen out of the background.

Something else....
The same month that Lemanczyk's career essentially came to an end (October, 1980), his son Matt was also born. Matt would grow up to be a pitcher, drafted in 2002 by the St. Louis Cardinals and pitched in the minor leagues. His career ended prematurely due to injury and he currently coaches youth baseball with the Long Island Whalers.
Posted by Dean Family at 10:42 PM