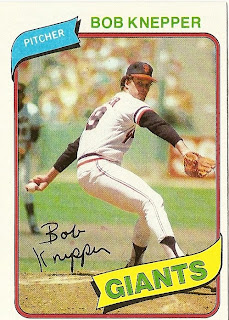 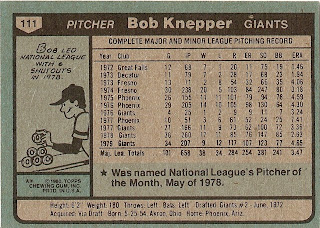 Who is this player?
Bob Knepper, starting pitcher, San Francisco Giants
In 1979, a promising Giants team fell to fourth, and some players blamed the team's demise on born-again Christians, like Knepper. Nicknamed by the press the God Squad, these players were accused of a lack of aggressiveness. The left-handed Knepper took the criticism to heart and faltered, finishing 9-12 with a 4.65 ERA. More tension erupted in 1980 after Knepper was quoted as saying that it was "God's will" when he gave up a game-winning home run early in the season. Though he repeatedly denied making the remark, Knepper's psyche was damaged, and he came unglued. He wound up 9-16 with a 4.10 ERA and was traded that winter to the Houston Astros.

Knepper grew up in California and as a young boy, his mother would tell him that someday he would play for the Giants. Mother proved to indeed know best when the Giants drafted him in 1972. After working his way through the minors with a blazing fastball, he made his debut in 1976. The following season, he was inserted into Giants starting rotation, due to injuries and remained there for the next four seasons. Knepper had his breakout season in 1978, when he finished 17-11 and led his league with six shutouts. No lefthander in the NL had a better ERA than Bob and he was seen as one of the best young pitchers in baseball.

When he arrived in Houston in 1981, Knepper changed his pitching style, to rely on finesse rather than on power. He began quickly, going 5-2 with a 1.49 ERA before the player's strike hit. He was rewarded for his performance with a spot on the NL's All-Star team and pitched two scoreless inning as the NL prevailed. Knepper finished second in the league in ERA as the Astros qualified for the postseason. Knepper started and lost Game 3 of the divsion series as the Dodgers defeated the Astros.

A durable and dependable starter, he won 15 in both 1984 and 1985, and then matched his career high with 17 in 1986 as the Astros won the Western Division title. In a rotation with stars Mike Scott and Nolan Ryan, it was Knepper that led the league in shutouts in 1986. During the NLCS with the New York Mets, Knepper got the ball in Game 6. For eight brilliant innings, he held the Mets scoreless, giving up just two singles. But he was knocked out in the ninth as the Mets began their historic comeback. Knepper again fell victim to his psyche, suffering a tremendous letdown. His depression lasted into 1987 as he led the league in losses and his ERA ballooned to 5.27.

During Spring Training of 1988, Knepper caused a national controversy when he made remarks about female umpire Pam Postema that were considered sexist. Knepper responded to the uproar by winning nine games in the first half and being named to his second All Star team. When he pitched poorly to start the 1989 season, he was traded back to the Giants for the stretch drive. He was used mainly as a swingman and did not appear in the postseason as the Giants advanced to the World Series. When he posted an ERA near 6.00 in his first 12 games in 1990, the Giants released him in June bringing his 15-year career to a close.

Why I love this card
This is a great action shot of Knepper in mid-delivery. Topps had come a long way in finally delivering some decent action shot in 1980 and moving away from the traditional posed action shots. Check out Knepper's grip on the ball...and it is pretty clear to boot. Makes you wonder if he was tipping his pitches??

Something else....
Like Knepper, I still haven't gotten over Game Six. Like the rest of world outside of New York, I really hated the Mets in 1986. In my mind, they had to lose. Had to. I remember coming home from school to watch Game 6 right about the time Knepper was taking the mound in the ninth inning. Up 3-0, the Astros were going to win and the Mets would have to face Mike Scott in Game 7 (who ABC showed leaning against the dugout rail about ten thousand times that inning). Well, Knepper blew the lead and the Astros fought valiantly before losing. I never did get an Earth Science project done that I was supposed to do for homework that night.
Posted by Dean Family at 9:00 AM