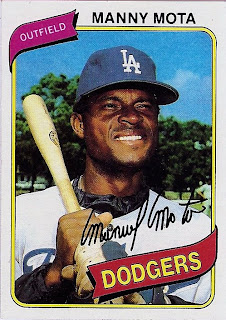 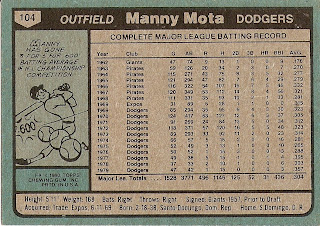 Who is this player?
Manny Mota, pinch-hitter, Los Angeles Dodgers
In 1980, Manny Mota's days as an active player were just about over. He established a major league record in 1979, becoming the most prolific pinch-hitter of all-time. He appeared in 47 games in '79, only once in the field, and had begun the transition of coach on manager Tommy Lasorda's staff. The hitting coach for most of 1980, he was activated in after the September call-ups and appeared in seven games in the Dodgers' stretch drive, batting .429.

Born in 1938 in Santo Domingo, Dominican Republic, the left-handed Mota demonstrated his hitting abilities when he first played in the minor leagues with old New York Giants. He played five years in the minors before finally making the Giants' (now in San Francisco) roster in 1962. He was sent back to the minors when he struggled in his rookie campaign and was traded to the Houston Colt 45's in November 1962. He never appeared in a game with Houston who similarlty traded him to Pittsburgh in April 1963. It was as a Pirate that Mota would make the majors for good when the Pirates called him up in July and he batted .270.

Mota spent six seasons in Pittsburgh, primarily as the fourth outfielder. Even though he batted .332 in 1966 and .321 in 1967 he was primarily viewed as a singles hitter in a powerful Pirate lineup. Because of their outfield depth, the Pirates did not protect Mota in the 1969 expansion draft and Manny was selected by the Montreal Expos. He lasted only half of a season in Canada as the Expos traded him to the Los Angeles Dodgers. It was in California that Mota would spend the next 40 years in uniform.

Once in L.A., Mota became a regular for the first time playing in the Dodger outfield and hit over .300 for the next five seasons. In 1973, Mota was selected to the National League All-Star team when he was leading the league in batting average. Beginning in 1974, Mota was used primarily as a pinch-hitter extraordinare, where he averaged 10 pinch hits for 6 straight seasons. The Dodgers, meanwhile, appeared in the World Series three times in the 1970s, and Mota carried a .375 postseason batting average. Unfortunatley, the Dodgers lost the World Series all three times.

Mota was held in such high regard by the Dodgers that he was also activated in 1982 as the Dodgers battled the Braves for the NL West flag. He only appeared in one game, which was finally the end of his 20-year career as a player. Almost 40 years after joining the Dodgers, Mota remains an active part of both the coaching staff and his community. Mota and his wife established the Manny Mota Foundation to provide needed resources and other assistance to disadvantaged youth and their families in both the Dominican Republic and the United States.

Something else....
Mota has the unfortunate distinction of being the only player in major league history to inadvertently kill a fan with a foul ball. In 1970, a line drive foul ball struck 14 year old Alan Fish in the left temple. The boy died several days later. Sorry for the downer.
Posted by Dean Family at 11:52 PM