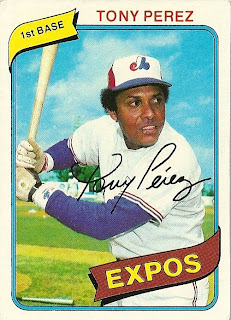 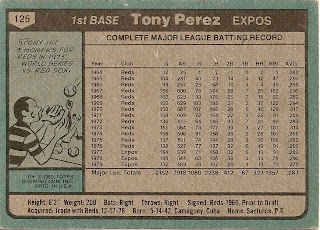 Who is this player?
Tony Perez, first baseman, Montreal Expos
Hall of Fame, Class of 2000.
Affectionately referred to as "Doggie" throughout his career, Perez moved to the American League in 1980, signing a contract as a free agent with the Boston Red Sox. There had been whispers that Perez' abilities were on the decline before the season began, but Perez answered his critics by leading the Red Sox in home runs and RBI and won the Lou Gehrig Memorial Award. His 25 home runs was seventh best in the league and his 105 RBIs was the first time in four seasons he topped the century mark.

A native of Cuba, the righthand hitting Perez signed with the Cincinnati Reds as an amatuer free agent in 1960. Originally a third baseman, he was the Pacific Coast League MVP in 1964 and was given his first taste of the big leagues late that season. Tony would be the first piece of the team that would eventually become the Big Red Machine. A seven-time All-Star he was named to the NL team in his first full season, 1967. He hit a home run in the 15th-inning that would lead the National League to victory and Perez was named MVP. He helped lead the Reds to the World Series in 1970 when he reacheed personal highs with 40 home runs and 129 RBI.

In 1972 he was moved to first base and solidified his reputation as one of the premier RBI men of his generation. Perez drove in 100 or more runs seven times in his career and in an incredible eleven-year stretch from 1967 to 1977, he drove in 90 or more runs each year. During the decade of the 1970s, Tony was second among all major-leaguers in RBI, with 954, behind only his teammate Johnny Bench. Meanwhile, the Reds won back-to-back World Championships and Perez' home run off of Bill Lee helped clinch Game 7 in 1975. Inexplicably, Cincinnati traded Perez to Montreal before the 1977 season.

Perez would spend three years in Montreal helping lead the young Expos toward contention. For the 1983 season, Pérez reunited with Reds teammates Pete Rose and Joe Morgan on the Philadelphia Phillies "Wheeze Kids. Still a feared hitter based on his reputation, Pérez was a reserve player on as the Phillies advanced to the World Series. Following the season, he returned to the Cincinnati Reds as a free agent, and became the oldest player in history hit a grand slam. He remained in Cincinnati as a part time player until his retirement following the 1986 season and a 23-year career.

In 1993, he was named manager of the Reds but was fired after only 44 games at the helm. He was given another opportunity when the was chosen to lead the Flordia Marlins in 2001, but again was fired before he could complete the season. His son, Eduardo, had a 13-year major league career and is currently seen on ESPN's Baseball Tonight. Today, Tony is a special assistant to the president of the Florida Marlins.

Why I love this card
I'm glad Tony Perez is in the Hall of Fame. I think he deserves it. But when I got this card in 1980, I never, even for a minute, thought of him as a Hall of Famer. I respected him, knew he was good, but never Hall of Fame. I didn't take care of Perez' cards, don't think I even put them in the plastic sheets. If you would have offered me a Richie Hebner for it, I would have traded you stright up. I guess it goes to show how underrated Perez was. Like the Reds, I didn't see the true value of Tony Perez until much later.

Something else....
No other Latin player ever had more RBI that Tony Perez. A short interview with Perez can be found here. Ken Burns meets Radar Love. Gotta love it.
Posted by Dean Family at 10:41 PM