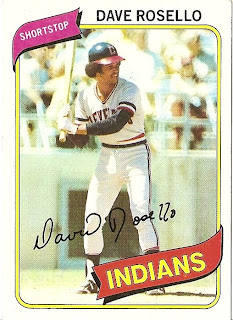 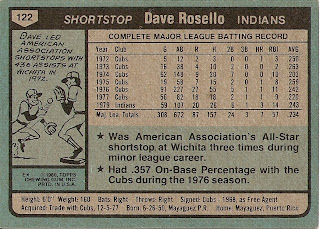 Who is this player?
Dave Rosello, reserve infielder, Cleveland Indians
A light hitting role player, the righthand hitting Rosello was primarily used to spell Indian starters Toby Harrah at third and Duane Kuiper at second. When Kuiper was lost early in the 1980 season due to a knee injury, Rosello was his inital replacement. He promptly lost the job to Jack Brohamer when he suffered a 4 for 29 slump (.137). When Brohamer didn't hit much better, Rosello was given another shot late in the season. He hit .349 over the last month of the season with five multi-hit games to raise his average nearly 60 points and finished with a .248 average.

A native of Puerto Rico, at one point in his career Rosello was viewed as the successor at shortstop to veteran Don Kessinger. He first appeared for the Cubs in a brief look at the end of the 1972 season. After hitting .313 at Triple-A, he was called up again in August 1973 and hit .263 in 16 games. The following season, he made the Cubs roster out of Spring Training but struggled at the plate, only hitting .203. Sent to the minors again in 1975, he was given another look late in the season and at one point had an average over .300.

Rosello made the most of his minor league career, being named the All-Star shortstop for the American Association on three separate occasions. In October 1975, the Cubs traded Don Kessinger and handed the position to Rosello. He was inserted at short and started for the Cubs on Opening Day. He appeared in a career high 91 games, but his performance was generally considered disappointing and he lost his job before the end of the season.

After hitting only .220 in subsitute duty in 1977, Rosello again spent the entire 1978 season in the minor leagues. When the season ended, the Cubs traded him to the Cleveland Indians. In 1979, Rosello achived career highs in home runs and RBI, primarily as a reserve. When Kuiper healed and returned to second base for the 1981 season, Rosello returned to sub status. It was the final season of his nine-year major league career. He played all of the 1982 season with the Indians Triple A affiliate in Charleston, but it was his last in professional baseball.

Why I love this card
I had a passing interest in the Indians at this time, probably because of their proximity to Detroit, both on the map and in the standings. I knew Rosello wasn't a starter but also that Topps missed the boat on the position flag on the top of this card. In 1979, shortstop wasn't Rosello's primary position when he did play. He most often appeared at third and then at second base.

Something else....
In reviewing Rosello's career, I noticed that he hit only 10 major league home runs. One of them came in this game a 23-6 Cubs win over San Diego. At least its a fun box score to look at. We've also added another double printed card to the list, which brings us to 11.
Posted by Dean Family at 9:36 AM