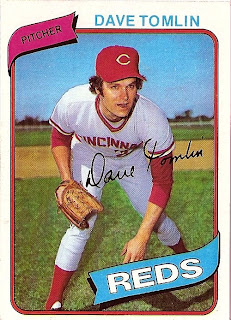 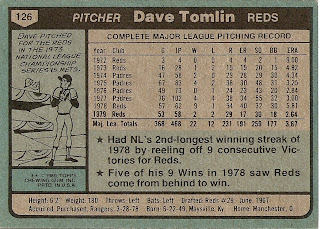 Who is this player?
Dave Tomlin, relief pitcher, Cincinnati Reds
As a lefthanded setup man, it was Tomlin's job to bridge the gap between the starters and bullpen ace Tom Hume. He was very successful in this role for the 1979 NL West Champion Reds, appearing in 53 games and notching a 2.62 ERA. 1980 however, would prove to be a different story. He was not as effective as the previous year and struggled most of the season to get his ERA under 5.00. By the end of the summer, he was hardly being used at all and the Reds released him on September 2.

As an 18-year old from Maysville, Kentucky, Tomlin was drafted by the Reds in 1967. He rose through the ranks and was given a late season look in 1972 after the Reds had wrapped up the NL West. He returned to the Reds the following season, appearing in 16 games, but made the team's playoff roster as the Reds again won the West. Tomlin even got a taste of the postseason, appearing in the NLCS, a series the Reds lost to the New York Mets.

At the end of the season, he was an addition in the Bobby Tolan-Clay Kirby deal and became a San Diego Padre. He would spend four seasons in San Diego, where the Padres used him extensively out of the bullpen. Twice he finished in the top three in his league in appearances (1975 & 1977). With his value high, the Padres included him in a trade to the Texas Rangers for future Hall of Famer, Gaylord Perry. He never appeared in a game with the Rangers as they promptly sold Tomlin to the Reds.

Tomlin would win a career-high nine games out of the bullpen in 1978, but had a 5.78 ERA. Off-season work with Reds pitching coach Bill Fischer corrected his mechanics and led to a productive 1979 season. After his release from the Reds, he signed on with the Toronto Blue Jays, but spent the 1981 season in the minors. Tomlin would spend the next four seasons splitting time in the minors with the occasional call-up. He was given looks by the Expos (1982 & 1986) and Pirates (1983 & 1985), but they were brief. After spending the entire 1987 season in Triple-A, Tomlin's career after 13 major league seasons, was over.

Like many ballplayers, Tomlin became a pitching coach at the minor league level, working in the Montreal and Atlanta Braves organizations. He joined the Boston Red Sox in 1998 in a similar capacity, until 2006, when he was named manager of the Rookie-level Gulf Coast Red Sox. He is still in that position today.

Why I love this card
I'll be honest, in 1980, I didn't know Dave Tomlin. Even today, I had trouble remembering him. I was always a fan of this Reds road uniform and love the appearance of Tomlin's stirrups. It kind of looks like Tomlin is pictured out on the prairie rather than a baseball diamond.

Something else....
Not a fan of the posed shots, this one is the fourth in a row. Lets hope that trend doesn't continue. Additionally, this is Tomlin's last card as an active player. Although he appeared in 27 games in '80, he didn't get a 1981 card. I assume that was due to him not being immediately signed after his September release, since Dave Lemanczyk got a 1981 card even though he was released in October, 1980.
Posted by Dean Family at 8:59 AM