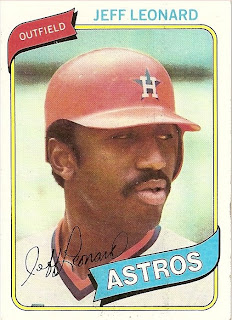 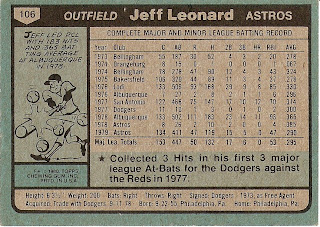 Who is this player?
Jeffrey Leonard, outfielder, Houston Astros
In 1979, Jeff Leonard was the starting right fielder in his first full season in the major leagues. He finished second in the Rookie of the Year balloting when he hit .290 in 134 games. When Houston signed free agent Joe Morgan, however, Art Howe was moved to first and Cesar Cedeno back to the outfield. The right-handed batting Leonard became the fourth outfielder. He suffered a season-long slump and batted only .213. Leonard did appear as a pinch-hitter in the NLCS against the Phillies three times, failing to get a hit.

Leonard signed with the Los Angeles Dodgers as a 17-year old amatuer free agent. He was called up to the Dodgers for a brief look in 1977 and in 1978, he led the Pacific Coast League in hits (183) and batting average (.365) while playing for the Albuquerque Dukes. The Dodgers traded him to the Astros to complete the Joe Ferguson trade and Jeffrey made his Houston debut shortly thereafter. When Leonard's slump continued into 1981, he was traded to the San Francisco Giants for Mike Ivie. Optioned to Triple-A Phoenix, Leonard batted over .400 when he was recalled.

It was by the Bay where he would earn his greatest fame. He batted over .300 in the last two months of the 1981 season, earning him a starting position in left field. Now known as "Hac Man," he would remain in the Giants lineup for the next six seasons. He was the team's leading hitter in 1983 and similarly led his team in home runs and RBI in 1984 & 1985, and hit for the cycle. Leonard and several other major leaguers received national attention in late-1985 when he testified in the Pittsburgh drug trials. Leonard, who also received immunity, avoided supension by Major League Baseball by donating 10% of his salary and 100 hours to drug-related community service.

In 1987, Leonard and the Giants had a memorable season. Leonard was selected to his first All-Star Game and the Giants won the National League West. They would face the St. Louis Cardinals in the NLCS. Leonard hit four home runs during the Series and drew the ire of Cardinal fans for his "one-flap down" home run trot. He was the fourth (and last) player to be named MVP of a postseason and play for the losing team.

The following season, he was surprisingly traded to Milwaukee in a largely unpopular move. After the season, he signed as a free agent with the Seattle Mariners, where he resurrected his career. A foot injury confined him to DHing, but he nonetheless reached career highs with 24 HR and 93 RBI and his second All-Star appearance. He was released after the 1990 season but he did not receive any interest and he retired after a 14-year career. In 2008, he was named manager of the Reno Silver Sox, but the team disbanded following the season.

Why I love this card
Leonard's other nickname during his playing days was "Penitentary Face." Looking at this card, I don't doubt it, but I can't imagine anyone calling him that to his face. There's also been a slight run on rookie cards as Leonard's is the second one since we turned over card #100. We had to get through 40 cards before we got to two in the first 100.

Something else....
I vividly recall the 1987 NLCS. I was rooting for the Giants slightly, but wouldn't have minded if the Cardinals won either. The dust-up with Leonard's home run trot added a nice backstory. He talked smack after the first two games and took 50 seconds to go around the bases in Game 3. In Game 4, he tried to score from first on a double, and Tony Pena crushed him in a collison at home plate. The Cardinal bench went ape. Two years later, when the Giants went to the Series, he traded barbs with Will Clark, calling him a racist.
Posted by Dean Family at 11:55 PM