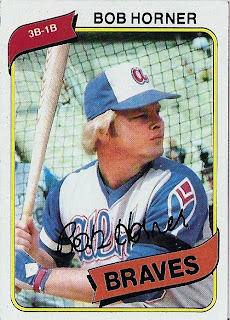 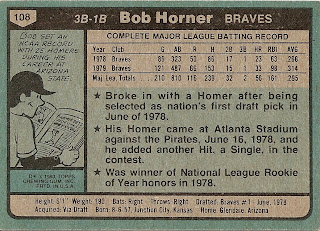 Who is this player?
Bob Horner, third baseman, Atlanta Braves
At the time of this card's release, Horner viewed as best young slugger in the game. His 1980 season began with controversy when owner Ted Turner wanted to send him to the minors in late April. He butted heads with Turner again over a fine, and even missed some time due to injury. Depsite all that, Horner exploded in July, smashing 14 home runs (one short of the league record). He finished the 1980 campaign with 35 home runs (2nd in the league) and was also second in slugging percentage. He finished 9th in the league's MVP voting and was widely seen as the building block of the Braves franchise.

Horner grew up in Glendale, Arizona and his prep career earned a scholarship to Arizona State University. His impressive college career at ASU included being named the inaugural winner of the Golden Spikes Award. An All-American second baseman in 1977 and 1978, Horner set an NCAA record with 58 career home runs for Arizona State, set a 25-homer season record, and was selected the MVP of 1977 College World Series when ASU won the National Championship.

Drafted by Atlanta with the first pick of the 1978 amateur draft, Horner was immediately assigned to the major league club and homered off Bert Blyleven of the Pirates in his debut game. In 89 games, Horner batted .266 with 23 home runs, 63 runs batted in in just 323 at bats. For his efforts, he was named NL Rookie of the Year. The following season, he was engaged in a prolonged contract squabble that caused him to miss all of Spring Training and then fractured an ankle on Opening Day that caused him to miss 31 games. He still was able to hit .314 (5th in the league), sock 33 home runs (4th) and bring home 98 (6th).

By 1981, he and Dale Murphy were the faces of the Braves franchise. He enjoyed another fine campaign in 1982, when he hit another 32 HR and had 97 RBI. He was selected to his first All Star Game and the Braves won the NL West for the first time in 13 years. At 24 years of age, Horner already had hit 138 home runs. He was off to a great start in 1983, hitting over .300 with 20 home runs when a broken wrist ended his season. The injury would be part of a series of setbacks that limited his playing time and effectiveness.

After his 1984 season was wiped out by injury, he had a strong comeback season in 1985 and the following year, he became the 11th player in Major League Baseball history to hit four home runs in a single game. Horner became a free agent in 1987, but Major League clubs were colluding to not sign free agents and drive down salaries. Unable to find a Major League club interested in his services, Horner signed a one-year contract with the Yakult Swallows of the Japanese League. He returned to MLB in 1988 to replace Jack Clark on the St. Louis Cardinals, but after 60 games, he injured his left shoulder. He retired following a 10-year career without ever spending a day in the minor leagues.

Why I love this card
Now that historcial power numbers are so screwed up in the wake of the steroid era, I had forgotten how impressive Horner was for a time. Indeed, four home runs in a game was a very big deal. Alas, Horner never seemed to get the attention that his contemporaries received. This card reminded me that for a brief period, Bob Horner was probably second only to Mike Schmidt as the best third baseman in his league and that's fairly impressive.

Something else....
Horner was part of the inaugural class of the College Baseball Hall of Fame in 2006. In 2009, he was elected to the Arizona Sports Hall of Fame and is currently enjoying retirement. If it means anything, he now looks alot like Greg "The Hammer" Valentine.
Posted by Dean Family at 11:15 PM