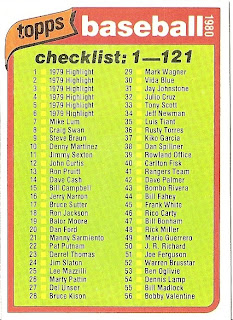 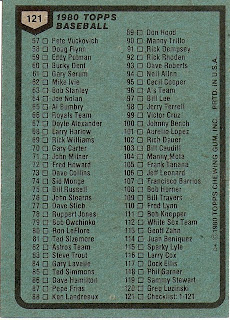 There isn't much to say about checklists and here is the first one so far in the 1980 set. It marks a milestone of sorts as its hard to believe that this blog has already covered 121 cards.

Why I love this card
Checklists really, really bummed me out. While they were part of the set, I always felt that I got rooked out of a card. At least a team card had a decent picture on it. A checklist was so...checklist.

Something else....
However, not all checklists are created equal. Granted, they stay in theme with the basic layout of the set, but it appears Topps tweaked here and there. The 1980 edition is actually a better checklist than the year before or year after in my opinion. Here's the 1979 checklist: 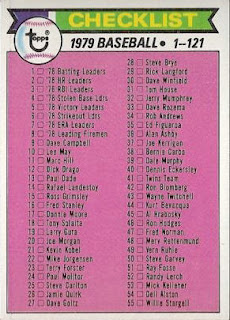 Purple is not a good color for a checklist. Too hard to read. While 1980 employs a bright green, at least the names show up a little better. The boxes also stand out better on the 1980 edition with an alternate color. That gives the 1980 set the advantage. 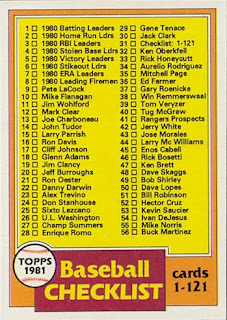 This one is easy on the eyes as well, dare I say even more so than the 1980 edition. However, notice the card number on this checklist - #31. Didn't Topps realize how hard it was to go back and forth checking off the cards? With the 1980 version, you had 120 cards and then the checklist last. I used to take the checklist out and then count off what I needed. Nice and easy. With the 1981s I had to go back and forth and always forgot to put the checklist back in the set. Again, advantage 1980. I know, I was lazy.
Posted by Dean Family at 2:08 PM