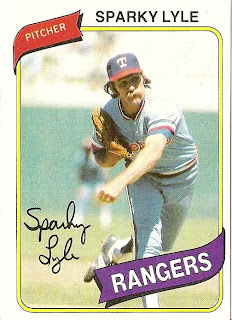 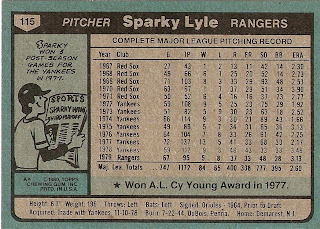 Who is this player?
Sparky Lyle, relief pitcher, Texas Rangers
At this stage in his career, Sparky Lyle's days one of the premier relief pitchers in the game had passed. While no longer the top fireman in the Rangers' bullpen, he had assumed a role of setup man and occasional closer. He was expected to serve in a similar capacity in 1980, but his ERA jumped more than a run and he was inconsistent. In September, the Phillies traded for him for the stretch drive and he helped Philadelphia win in the NL East with a 1.93 ERA and two saves in 10 games. Although the Phillies won their first World Series title in 1980, Lyle did not appear in the postseason, having been acquired by the Phillies too late to qualify for that.

Albert Walter "Sparky" Lyle was originally drafted by the Baltimore Orioles in 1964 as an amateur free agent. When the season ended, the lefthander was drafted again by the Boston Red Sox as a Rule 5 selection. He first appeared with the Red Sox as a rookie on July 4, 1967, during their "Impossible Dream" season. By 1969, he would emerge as the Red Sox' top reliever. After pitching effectively in New England for several seasons, he was surprisingly traded to the New York Yankees in March of 1972.

Lyle's best season came in 1977 when he became the first ever AL reliever to win the Cy Young Award. He led the league with 72 appearances with 13 wins and 26 saves. The Yankees won their first World Championship in thirteen years. But despite the fact Lyle was at the top of his profession, the Yankees signed Goose Gossage as a free agent, and Gossage followed with an outstanding 1978 season which made Lyle expendable. Not helping his cause, Lyle also openly defined owner George Steinbrenner and wrote a tell-all book about this period called "The Bronx Zoo." In November 1978, Lyle was part of a major trade that sent him, along with four other players and cash, to the Texas Rangers.

Lyle spent the 1981 season in Philadelphia, mostly as a middle reliever, winning nine games but posting a high 4.44 ERA. In 1982, he was purchased by the Chicago White Sox and played his last game that September. He finished his 16-year career with 238 saves in 899 games pitched — all in relief. In 1998, he became the manager of the Somerset Patriots, an independent minor league team. He managed the team to pennants in four times and has been the only manager in team history.

Why I love this card
Much like Bill Lee, Sparky Lyle was one of the favorites of the older kids in the neighborhood. As he related in "Bronx Zoo," Lyle was known for sneaking into the locker room to sit au naturel on birthday cakes prepared for teammates, leaving the imprint of his posterior on the frosting. I could not understand why that was so funny. Come to think of it, I still don't understand why that was so funny. Had to be there I guess.

Something else....
When asked about his success, Lyle once said

"Ted Williams told me that I'd never make the big leagues unless I came up with a slider. . . after I perfected the slider . . . I threw the pitch so it would come straight at the batter until it got to within three feet of the plate. Then it would break down....When Ted Williams told you something, you tried it"

Who said that Ted didn't know anything about pitching?
Posted by Dean Family at 9:58 AM