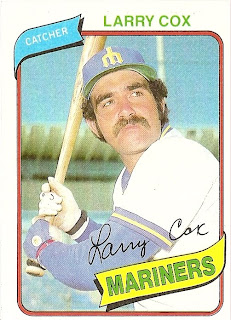 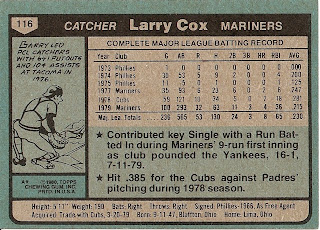 Who is this player?
Larry Cox, catcher, Seattle Mariners
A reserve for most of his career, in 1980 Larry Cox finally became a regular player as starting catcher for the Seattle Mariners. Seattle was a young team at that time, only three years removed from expansion. Larry was a decent fielder and handler of the pitching staff but struggled at the plate. He was under .200 for most of the summer and with the Mariners out of contention, more playing time went to the younger Jerry Narron. He finished the season with a .202 average. In December, he was part of an 10-player trade that sent him to the Texas Rangers.

A native of Bluffton, Ohio, Cox was the MVP of his high school team and signed with the Philadelphia Phillies as an amateur free agent. For the next seven seasons, Cox's baseball career resembled a road map of several minor league stops. Spartanburg, South Carolina. Huron, South Dakota. Tidewater, Virginia. Raleigh-Durham, North Carolina. Hawaii. Toledo. By the time he made his major-league debut in 1973, Cox had more than earned his dues. However, he appeared in only one game and was shuttled back to the minor leagues.

He split the 1974 & 1975 seasons between Philadelphia and the minors and was traded to the Twins organization in October, 1975. He spent the entire 1976 campaign back in Triple-A, Tacoma. It was after that season that Cox received the break that arguably saved his career when he became an original member of the expansion Seattle Mariners.

Starting in 1977, Cox was in the majors for five full seasons, playing for the Seattle Mariners (1977), Chicago Cubs (1978), the Mariners again (in 1979 and 1980) and Texas Rangers (1981). While primarily a substitute, Cox established a reputation as the proverbial student of the game and a valuable asset to the pitching staff. It was in his second tour of duty with Seattle that Cox saw the most playing time, appearing in over 100 games each season.

He returned to the Cubs again briefly in May 1982 but spent most of that season beginning his second career as a coach in the minors. His nine-year major league career may have ended but he was soon the Cubs Triple-A manager in Iowa where he managed Rafael Palmiero and future Hall of Famer Greg Maddux. He was promoted to bullpen coach on Don Zimmer's staff in 1989, the year the Cubs won the NL East. However, that would be Cox's last season in baseball as he passed away on February 17, 1990 when he suffered a heart attack while playing racquetball.

Why I love this card
Please indulge me while I allow my immaturity to shine through for a moment. In earlier posts, I mentioned how some of the older kids in the neighborhood would chuckle about the exploits of Sparky Lyle or Bill Lee. I also went along with the older kids who laughed at the name "Cox" when it had nothing to do with baseball - and I had no idea why I was laughing. Invariably, there would be references to Dick Davis, Pete LaCock and eventually Dick Pole. And I couldn't make the connection. It must be me, but there was probably no greater age differential than between nine and twelve.

Something else....
I researching Cox's extensive minor league career I noticed that he was one the first professional team ever managed by Dallas Green and played Triple-A under future Hall of Famer and Senator Jim Bunning. Thought it was interesting.
Posted by Dean Family at 11:14 PM