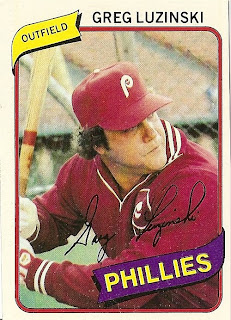 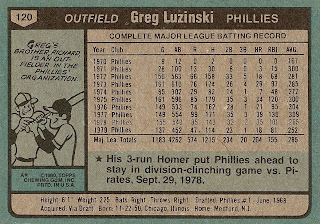 Who is this player?
Greg Luzinski, leftfielder, Philadelphia Phillies
While 1980 was a memorable summer for the Phillies and the city of Philadelphia, Greg Luzinski was going through the worst season of his career. "The Bull" started the season decently, but fell into a slump and then missed more than a month due to a knee injry. Although he finished the season with a career low .228 batting average, he came alive in the NLCS. He had game-winning RBIs in Games 1 and 4 and the Phillies advanced to the World Series. A week later, Luzinski and the Phillies were World Champions.

One of the more prolific sluggers of the 1970s, Greg Luzinski was a first round selection of the Phillies in the 1968 draft. A product of Notre Dame High School in Niles, Illinois, he made his major league debut in a little more than 18 months when he was given a late-season look. He was called up again for the final month of the 1971 season before earning a starting position in 1972.

In his first full season, he was the best hitter on the team and in his second, he placed in the league's top ten in home runs and RBI. By all accounts, he was one of the best young sluggers in baseball. While he suffered a setback in 1974 due to injury, he was about to embark on period that would make him one of the team's most popular players.

Beginning in 1975, The Bull was selected to four consecutive All-Star Games, peaking in 1978 when he was the top vote getter in the National League. It was well deserved as during this period (1975-78) he was twice the runner-up in the MVP voting, led the league in RBI in 1975 and averaged 32 home runs a year. But he was more than just a slugger as he hit over .300 for three seasons in a row. The Phillies, meanwhile, won the NL East for three straight years but were unable to advance to the World Series.

Prior to the 1981 season, he was sold to the Chicago White Sox for an undisclosed sum. As the Sox' designated hitter, Greg remained relatively healthy and helped lead the team to the 1983 AL West title. The Chicago native hit 84 home runs in four seasons on the South Side, where he would close out his career. In 1984 he played his last season after 15 years in the majors. Today, he is still a fan favorite in Philadelphia, and he opened "Bull's Barbecue" in the Phillies' Citizens Bank Park.

Why I love this card
It seemed that many of the 1980 Phillies were shot taking their cuts in the batting cages and Bull was no exception. As a young Pirate fan, it scared me that they were so serious about winning the division, they didn't even have time to pose for cards - they had to get their hitting in.

Something else....
Like most former athletes, Luzinski did a Lite Beer commercial that you can see here. However, I didn't realize that Bull was a trend setter. Before the Super Bowl Shuffle, even before the Baseball Boogie, here was Luzinski and some of his Phillies friends in "Phillies Fever". You have been warned.
Posted by Dean Family at 10:56 PM