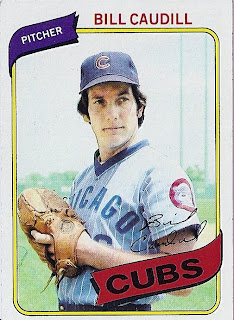 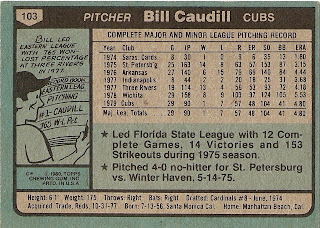 Who is this player?
Bill Caudill, relief pitcher, Chicago Cubs
In his rookie season as a swingman on the Cubs' staff, Bill Caudill had a rough 1979 season, going 1-7 with a 4.80 ERA. He pitched erratically as a starter and was moved into the bullpen entirely for 1980. The move proved to be a good one for Bill as he served as Bruce Sutter's setup man. He appeared in 72 games (6th most in the NL), winning four and posting a sparkling 2.19 ERA. He thrived in the pressure situations of relief pitching and was seen as a potential star.

Originally drafted by the St. Louis Cardinals in 1974, Caudill was a strong prospect as a starting pitcher. He was traded twice before he made his major league debut, first to the Reds at the start of the 1977 for Joel Youngblood and after the season to the Cubs for Bill Bonham. When Sutter was traded to the Cardinals before the 1981 season, Caudill did not resume his role as a setup man, rather he was moved back to the starting rotation. The move did not agree with him as Caudill went 1-5 with a 6.28 ERA as a starting pitcher. He finished the year in the bullpen, but his confidence was shaken from the experiment. When the season ended, Caudill was traded, in what would be the biggest break of his career.

First traded to the Yankees and then quickly shuttled to the Seattle Mariners, Caudill became the closer and a huge fan favorite. In his first year in Seattle, he won 12, saved 26 and finished with a 2.35 ERA. He was 7th in the Cy Young Award voting and deserving of All-Star consideration. He repeated his save total the following season and earned not one, but two nicknames while a Mariner. A nice summary of how he earned both can be found here. In an inexplicable move, the Mariners traded Caudill after the 1983 season to the Oakland Athletics.

Caudill only spent one season in Oakland, but it was a successful one as Bill was named to the All Star team for the only time in his career. He saved a career-high 36 games, which was the second most in his league. The gregarious Caudill continued some of his antics in Oakland, but it was soon clear that the A's would not be able to meet his salary demands. Rather than lose him via free agency, Oakland traded Caudill to the Toronto Blue Jays in a move that was widely seen as the move that would ensure the postseason for Toronto.

Indeed, the Blue Jays would reach the playoffs for the first time in 1985. Caudill started slowly but pitched very well in the second half of the season. He finished with an ERA under 3.00 and in the top 10 in saves, but did not make an appearance in the Jays' loss in the ALCS to the Royals. He began to suffer arm injuries in 1986 and was released at the end of the season. He finshed his nine-year career in Oakland a year later. In retirement, Caudill has been been co-coach with former teammate Julio Cruz at the Eastside Catholic High School in Kirkland, WA since 1995. When not coaching, Bill also works for agent Scott Boras. The two were minor league teammates and Bill was Boras' first client.

Why I love this card
Finally! Another Chicago Cub. Its been almost 50 cards since the last one, that's quite a drought. Caudill's picture here is likely from 1979 his rookie year. That season the Cubs had in their bullpen; Caudill, Sutter, Dick Tidrow, Donnie Moore and Willie Hernandez. I didn't realize they had all that talent. In typical Cub fashion, they traded them all away. Consider that those five collected seven All-Star selections, six post-season appearances, one MVP, two world championships and 490 saves after they left the Cubs. Amazing.

Something else....
In 1982, the Mariners introduced a nautically themed bullpen car called the Tugboat. On Opening Day, Caudill stole the keys during pregame festivities, leaving the Tugboat stranded on the left-field line and delaying the start of the game. I have no memory of this at all; you can see it in all its glory here and here.
Posted by Dean Family at 1:47 PM