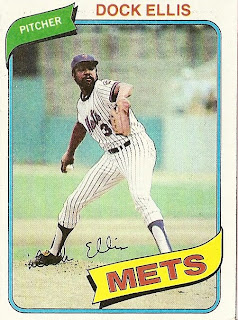 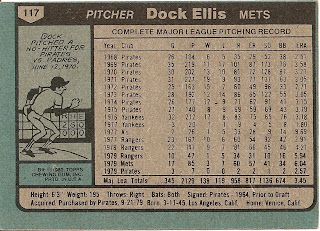 Who is this player?
Dock Ellis, starting pitcher, New York Mets
By the time this card was in my hands during the spring of 1980, Dock Ellis' colorful 12-year career was at its end. He began the 1979 season with the Texas Rangers, was traded to the New York Mets in June and sold to the Pittsburgh Pirates in mid-September. It was not a successful season for Dock, as he won only 4, lost 12 and posted an astronomical 5.84 ERA in his three stops. He was, however, able to finish his career as a Pittsburgh Pirate, a small contributor to the Fam-A-Lee that won the World Series.

Drafted as an amateur free agent by the Pittsburgh Pirates in 1964, Dock Ellis was part of a great influx of great young Pirate talent that would lead the Pirates throughout the 1970s. The strong right-hander became part of the Pirates starting rotation in 1969 and in 1970, famously pitched a no-hitter while under the influence of LSD. To hear the call of that game, as well as Dock's reflection's on it, click here. To commemorate the 35th anniversary of the no-hitter, the Dallas News printed an excellent biography on Dock. Rather than have me fumble through, click here for a great read.

A quote from Dave Parker in that article sums up the kind of player Dock Ellis was:

Dock Ellis was without question the most intimidating pitcher of his era. "Bob Gibson is up there, too, obviously, but with Dock it wasn't just his stuff. It was his flamboyance, his perceived militancy and his fearlessness. When he came and said he was gonna hit all those Reds, I thought, 'You ain't gonna do nothing, man.' Then he did it. I gained a lot of respect for him right there. Dock was and is one of my best friends--I call him my baseball father--but after he left the Pirates, he said he was gonna hit me in the face. And every time I faced him, I was scared."

Parker, of course, was referring to a game when the Cincinnati Reds taunted the Pirates after beating them in the 1972 National League Championship Series. Ellis decided to motivate his team by hitting every single batter in the Reds' lineup. He hit the first three and walked two (although his intent was clear) before he was pulled.

Ellis pitched in the postseason five times in his career and in two World Series. He was part of the 1971 World Champion Pirates when he won a career high 19 games and started the All-Star Game for the National League. Many times throughout his career he was tagged with the label when he spoke out against racism or would make a point on something he believed in. Case in point: when baseball brass complained about his haircut, he wore hair curlers on the field. It would underscore what kind of man Dock Ellis was. He died on December 19, 2008 at the age of 63 following a liver aliment. Meanwhile, his daughter has posted a tribute video on Youtube that can be seen here.

Why I love this card
Whenever I think of Reggie Jackson's famous 1971 All Star home run I think of Dock Ellis. To me they are inseperable. What I didn't know was that when Ellis faced Reggie in 1976 for the first time after that home run, Ellis beaned Reggie in the face.

Something else....
I can't understand why Ellis would be pictured with the Mets in his 1980 card and not the Pirates, the team that he finished the season with. Granted he appeared in only three late-season games for only seven innings, but its strange to have him on the Mets when he clearly wasn't with them anymore.
Posted by Dean Family at 9:42 PM