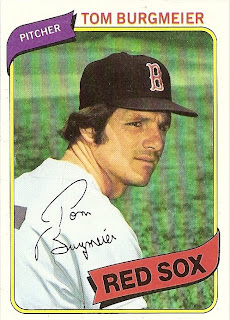 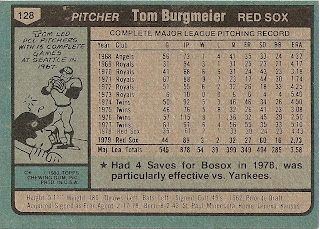 Who is this player?
Tom Burgmeier, closer, Boston Red Sox
After pitching most of his career obscurity, the 36-year old Burgmeier enjoyed an outstanding 1980 season. With relief ace Bill Campbell unavailable during the early part of the season due to injury, the lefthanded Burgmeier was given the task. He earned 15 saves during the first half of the season and was rewarded by being selected to the AL All-Star team. He finished the 1980 campaign with a career-high 24 saves which was fifth best in the league.

Originally drafted by Houston when they were the Colt 45s, he debuted with California at Yankee Stadium in 1968. The game was delayed due to Martin Luther King's funeral, and Burgmeier pitched one inning of scoreless relief. At the end of the season, he was selected by the Royals in the expansion draft and spent five seasons in Kansas City. His best season was 1971 when he won nine, saved 17 and finished with a 1.73 ERA. He was traded to the Minnesota Twins before the 1974 season.

In Minneapolis, Burgmeier had an outstanding 1976 season going 8-1 with a 2.50 as a setup man to, ironically, Campbell. However, he had a horrid 5.09 ERA the following year and he left the Twins as a free agent. He would pitch in Boston for five seasons, four of them with an ERA under 3.00 - quite a feat for a lefty at Fenway. After the 1981 season, Burgmeier suffered a stroke. As he told the Boston Globe:

"It happened just like that," snapping his fingers. "I was talking to my friend and all of a sudden he asked me, 'Have you been drinking?' My speech was slurred and I didn't even realize it, though I realized it afterward. When people say stroke, they automatically think you've been debilitated. I was in the hospital for about three days undergoing tests, and the next day I was out quail hunting. The only effect for me is that my wife told me I was dragging my right leg for a couple of days after it happened."

Burgmeier had one of his best seasons after his stroke when he went 7-0 with a 2.29 ERA in 40 appearances with the 1982 Red Sox. He was granted free agency after the season and he signed a contract with the Oakland A's. Again, he had two solid seasons as a setup man, both years finishing with an ERA under 3.00 but tendinitis in his shoulder ended his career in 1984 after 17 major league seasons. In retirement, Burgmeier became a coach in Royals chain for many years and is currently the pitching coach of the Omaha Royals.

Why I love this card
When I first saw this card and figured out how old Tom Burgmeier was during the summer of 1980, I distinctly remember saying something along the lines of "36?!? He's old!!" Now that I am on the other side of 36, sometimes I wonder what happened to that kid. Then I think, "That's right! The blog."

Something else....
On August 3, 1980,Burgmeier moved from the pitcher's mound to left field with two outs in the bottom of the ninth inning. Skip Lockwood replaced Burgmeier on the mound and retired the final batter to save a 6-4 win over the Texas Rangers. Manager Don Zimmer elected to keep Tom in the game in case the batter got on base--in that case Burgmeier would have returned to the mound to face Mickey Rivers. Burgmeier was the first Red Sox pitcher to play a position since Mike Ryba caught in three games in 1942. Any chance to bring up Mike Ryba is a good one.
Posted by Dean Family at 9:35 PM