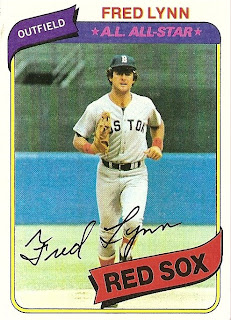 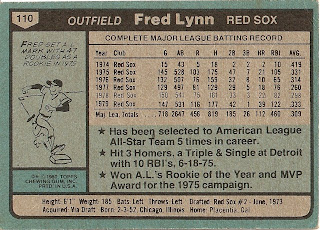 Who is this player?
Fred Lynn, centerfielder, Boston Red Sox
During the summer of 1980, Fred Lynn was regarded as one of the best players in baseball. The defending American League batting champion, Lynn had made a run at a Triple Crown in 1979, finishing second in homers and fourth in RBI. He had been named to the All-Star team every season of his career, hitting a home run in the AL's loss in the 1980 Classic. He was again batting over .300 and already hit for the cycle when an fractured foot ended his season prematurely. When the season ended, Lynn found himself the subject of several trade rumors.

Attending USC as a football scholarship, Lynn played wide receiver and defensive back as a freshman before shifting to baseball full-time. He was an All-American in 1972 & 1973 and was selected in the second round by the Boston Red Sox in 1973. In a little more than a year, Lynn made his major league debut and hit .419 in 15 games. It would be a precursor of what was to come in 1975. Teaming with Jim Rice, the "Goldust Twins" led the Red Sox to the American League pennant. Lynn in particular was outstanding, leading the league in runs, doubles and slugging percentage while hitting .331. He was named Rookie of the Year and MVP, and the Red Sox famously battled to the seventh game of the World Series before falling in the final game.

Expectations were high for the Red Sox in 1976, but the season was a disappointment. Lynn, however, cemented his reputation as a star at the plate and in the field. He was terrific diving forward, snaring line drives, and jumping to reach over fences and take home runs away from hitters. During his career, Lynn earned Gold Gloves four times and was a staple on This Week In Baseball. His daring defensive play, however, eventually cut into his effectiveness at the plate as the cumulative effect from the injuries began to take its toll. He began the 1977 season on the disabled list, with torn ligaments in his left ankle. He ended up hitting .260 in 129 games.

In 1978, Lynn's ankle returned to health and he hit .298 with 22HR, and 82RBI, but again, the Red Sox famously lost the AL East in a one-game playoff. Lynn was traded to the California Angels prior to the 1981 season when the Red Sox would not meet his salary demands. He helped lead the Angels to the 1982 ALCS and was named Series MVP when he batted .611 even though California lost in five games to the Milwaukee Brewers. The following season, Lynn hit the only grand slam home run in All Star history. It would be Lynn's fourth All Star homer in his ninth and final All Star appearance.

On November 8, 1984, Lynn signed with the Baltimore Orioles as a free agent. He would play with the Orioles for four seasons, hitting 23 home runs from 1984 through 1987. He was a useful player, batting as high as .287 in 1986 and a .499 slugging average. Injuries caused him to miss time and the most games he played in a season for the Orioles was 124 in 1985. He was sent to the Detroit Tigers at the trading deadline in 1988 and also spent the 1989 in Motown, but it was becoming clear the the end of his career was near. He played his 17th and final season in 1990 as a San Diego Padre. In retirement, he has appeared on ESPN as an analyst, been a staple at All-Star Fan Fest, and has been involved with Child Haven, a charity for disadvantaged children.

Why I love this card
When I began this blog, this was one of the cards that I had in mind. I still think of this card when I think of this set. I played Little League for the St. Joan Yankees during the summer of 1980 (hated it was the Yankees) but was assigned #19, Lynn's number. I also played the outfield (because I wasn't that good) but this card made me run off the field with my glove up like Lynn. Even though we finished first that season, my enduring memory of that summer is running off the field like Fred Lynn.

Something else....
My Dad was also a Fred Lynn fan. Not because of this card, but because he was in attendance at the best game of Lynn's career on June 18, 1975. Lynn had 10 RBI and three HR and just missed a fourth. Family legend goes that I was supposed to be in attendance but my Mom decided that a night game was way past this four-year old's bedtime. At least Dad got to see a memorable game.
Posted by Dean Family at 9:59 PM