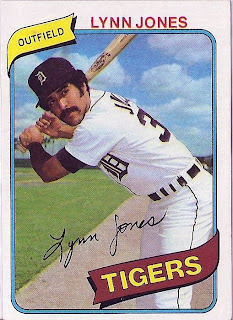 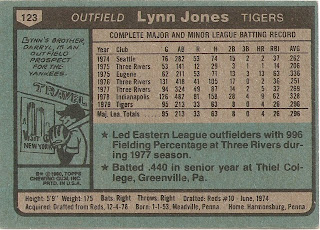 Who is this player?
Lynn Jones, reserve outfielder, Detroit Tigers
As the 1980 season began, Jones had just been named the Tigers' Rookie of the Year when he batted .296. Typically batting in the lower third of the order, he was primarily a singles hitter with decent speed and a good glove. He was scheduled to split duties in right field in 1980 with Champ Summers starting against lefthanders. A knee injury suffered in Spring Training sidelined Jones for the majority of the season as he appeared in only 30 games and batted .255.

Originally drafted in 1974 by the Cincinnati Reds, Jones was a product of Thiel Collegein western Pennsylvania. It was difficult for Jones to advance in the Cincinnati organization as the team enjoyed a wealth of talent in the mid-1970s. After four seasons in the minor leagues, he hit .328 with Triple-A Evansville and the team finished with the best record in the regular season. However, it was not enough to get Jones promoted and he was selected by the Detroit Tigers that winter in the Rule 5 draft.

Jones made the Tigers out of Spring Training when Rusty Staub was injured. His hitting enabled him to find a spot on the club, typically as a fourth outfielder. Additionally, his older brother also made his major league debut in 1979 with the New York Yankees. Jones never found consistent playing time in Detroit and his games played decreased every year from 1981 to 1983. When the season ended, he signed on as a free agent with the Kansas City Royals.

Used primarily as a spot starter and pinch-hitter in 1984, Jones batted .301 as the Royals won the AL West championship. Ironically, the Royals lost the ALCS in three straight to Jones' old team, the Tigers. The following season, Jones appeared in a career-high 110 games, again mostly as a defensive replacement. That season the Royals won their first and only World Championship and Jones contributed a double and triple in the Royals' seven game victory over St. Louis. After hitting a meager .128 in 67 games in 1986, he did not receive any free agent offers and his eight-year career came to a close.

After this playing days, Jones served as first base coach for the Royals in the 1990s and managed for many years in the Florida Marlins chain. He was a coach with the Red Sox when they won the World Series in 2004 and today is the roving outfield and baserunning coach in the Atlanta Braves chain.

Why I love this card
This Lynn Jones card always reminds me of little Timmy, a neighborhood kid who was three years younger than me. We told him that he had to have a stance like a major leaguer to play with the older kids and somehow we all decided on Jones, using this card as a point of reference. After all, he was a Tiger. Could we have picked a worse card? It looks like Lynn is trying in vain to fit in the picture. Damn if little Timmy could still hit though, even at four years old.

Something else....
This is unofficial, but I think that the Jones' brothers (Lynn and Darryl) join the Alomars as the only set of brothers to make their major league debut in the same season.
Posted by Dean Family at 11:40 PM