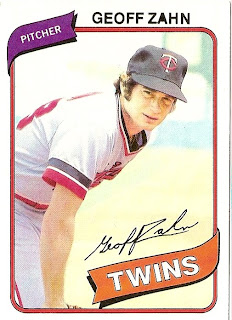 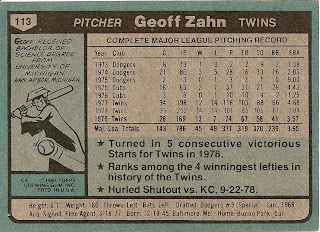 Who is this player?
Geoff Zahn, starting pitcher, Minnesota Twins
The lefthanded Zahn resurrected his career in the Twin Cities. When Dave Goltz left prior to the 1980 season via free agency, Geoff was the #2 starting pitcher on the club. He won 14 games and finished second in the AL with five shutouts. However, he also finished second in the league in losses (18) and his ERA rose nearly a full run from the previous season. Like many of his other better players, Twins owner Calvin Griffith let Zahn leave the Twins via free agency and he signed with the California Angels in December.

Drafted three times before signing with the Los Angeles Dodgers in 1968, Zahn toiled in the minor leagues for seven seasons before finally making his debut in 1973. He was effective as a swingman the following season, posting a 2.03 ERA with the Dodgers in 21 appearances, but he did not appear in the postseason as Los Angeles advanced to the World Series. Traded to the Cubs in May of 1975, he proceeded to have an acceptable half season with Chicago, but lasted only four appearances before being sent down to Wichita.

Released by the Cubs, he was picked up as a free agent by the Minnesota Twins, where a new hard slider allowed him to stick at the major league level, winning double digits every year with a mediocre Twins team. He finished in the top 10 in ERA two consecutive years as a Twin (1978-79) and was known for his control. In his first season in Anaheim, he fit into the Angel rotation but was mediocre, leading the league in earned runs and home runs allowed.

The following year was memorable for the Angels and a career year for Zahn. That year, he went 18-8, and finished sixth in the Cy Young voting that year when he finished second in the American League in victories. The Angels, meanwhile, won the AL West championship. With the Angels up 2-0, Zahn took the mound in Game 3 to try and close out the Series. Unfortunately, he gave up three earned runs in only three and two third innings, losing the first of three in a row in a historic collapse.

In 1983, an inflamed shoulder cost him a month's time, snapping a six-year streak of ten or more wins. He came back strong in 1984 to go 13-10 and lead the AL in shutouts and his ERA dropped for the third consecutive year. Arm trouble recurred in early 1985, and he was released at the end of the season, ending a 13-year career. In retirement, Zahn was the head baseball coach at his Alma mater, the University of Michigan from 1996 to 2001. Today, he works as a broadcaster for Comcast and tours as a motivational speaker. His website can be found here.

Why I love this card
What I remember most about Zahn, especially when I first got this card, was that I had no idea how to pronounce his name. It was at least a year before I stopped calling him "Gee-off" Zahn. Even later on when I knew better, he was still "Gee-off."

Something else....
Great cartoon on the back of this card with "Zahn" dressed in a cap and gown. Stay in School kids. Nice little run on lefthanded pitchers, that's four out of the last eight cards.
Posted by Dean Family at 8:52 AM