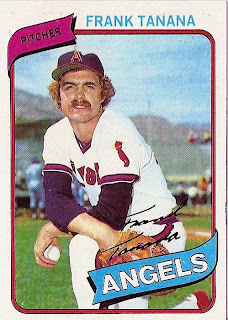 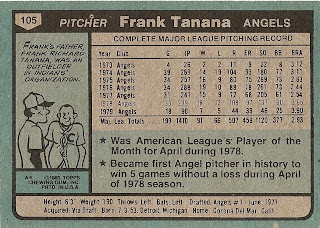 Who is this player?
Frank Tanana, starting pitcher, California Angels
For the first time in his career up to the point this card was printed, Frank Tanana began to struggle with injuries. The left-hander pitched the division-clinching game that earned the Angels their first ever playoff birth, but he started only 17 games for the AL West champions. He started slowly in 1980, beginning 3-9, and he refused to be sent to the minor leagues. There were whispers that he had lost his fastball. He turned things around in the second half, however, going 8-3 with a 2.84 ERA.

The son of a minor league outfielder, Frank Tanana was a two-sport high school prep star that was drafted in the first round of the 1971 draft by the Angels. Blessed with a blazing fastball, Tanana zipped through the Angels' minor leagues as a big winner and made his major league debut in just two years. He won a job in the starting rotation in 1974 and he won 14 games and struck out 180 batters.

By 1975, he and teammate Nolan Ryan were becoming the most feared pitching duo in baseball. Together, they would fan 500 or more opponent three times, more often than any teammates in history. Tanana in particular had a spectacular breakout season in '75. He led baseball with 269 strikeouts (17 in one game), was 16-9 with a 2.62 ERA and finished fourth in the AL Cy Young voting. He was only 21 years old. The following season (1976), he won 19 games and made his first of three consecutive All-Star teams. The year after that (1977) he led the league in ERA and shutouts (7). Comparisons to some of the greatest left-handers of all-time invariably started.

While he won 18 games in 1978, Tanana began to feel fatigue in his elbow. He would never again be the dominant flamethrower he was previously. However, he never lost his control, and he began his transition into the second stage of his career. After a dispute with the Angel front office in 1980, he was traded to the Boston Red Sox in a package for Fred Lynn. He lasted one season in Boston, who shipped him to the Texas Rangers, where he led the league in losses 1982. When he began poorly in 1985, the Rangers traded him to his hometown Detroit Tigers.

In Detroit, Tanana would be an important part of the Tiger rotation for the next seven seasons. His assortment of "junk" pitches at slow speeds kept hitters off guard and his pinpoint control was key to his success. Tanana's masterful performance on the final day of the 1987 season clinched the AL East for the Tigers with a memorable 1-0 shutout. He would earn his 200th win and 2000th strikeout in a Tiger uniform and posted a winning record in six seasons. Even though he was a popular Tiger, new management in 1992 showed him the door and he played the 1993 season with both New York teams, the final year in his 21-year career. Today, Tanana focuses on spreading the Word of God and started two discipleship groups that focus on prayer, memorizing Scripture, and teaching men how to spend personal time studying the Bible.

Why I love this card
Ah, Frank Tanana. I have no memory of the young flamethrower for the Angels pictured here, my memories are all of the junkballer with the Tigers. I saw him countless times during his tenure with the Tigers, but I probably remember most the game I didn't see him start. The last weekend of the 1987 season, my Dad was lucky enough to have access to tickets to either the last or second to last game of the 1987 season against the Jays. My choice. I chose the Saturday game, thinking at least we could see the Tigers clinch a tie. Great game, Trammell wins it in 12-innings with a ball through Manny Lee's legs. The next day, Tanana hurled the gem. My timing was never good.

Something else....
Frank Tanana is one of two pitchers to surrender a home run to both Hank Aaron and Barry Bonds. He also faced Minnie Minoso in both of his plate appearances in 1976 and 1980 when Minoso was activated by Bill Veeck in an effort to get Minoso a plate appearance in five decades.
Posted by Dean Family at 12:02 PM