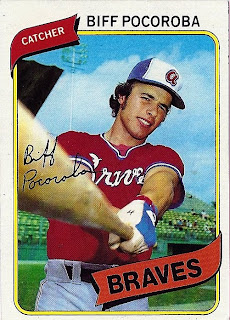 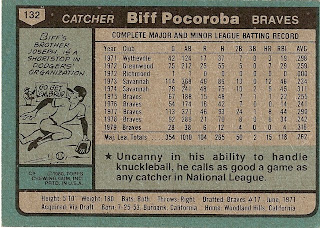 Who is this player?
Biff Pocoroba, reserve catcher, Atlanta Braves
The Braves' Opening Day catcher, Biff Pocoroba was looking forward to returning to full time status in 1980 after losing almost all of the previous season due to injury. He tore a muscle in his right forearm two weeks into the season and missed more than a month. When he returned from the DL, he had lost his job to Bruce Benedict and was only used as a pinch-hitter for the remainder of the season. He appeared in 70 games in 1980 and batted .265.

The only major leaguer whose birth name is indeed Biff, Pocoroba was selected by the Braves in the amateur draft in 1971. After paying his dues, he made the Braves in 1975, largely due to his strong performance in Spring Training that year. At one point, he threw out 11 consecutive would-be base stealers and when he made the team, hit a respectable .255. The following season, he was the Braves Opening Day starter for the first time, but an injury ended his season prematurely due to a shoulder injury and he batted a disappointing .241.

Biff rebounded in 1977 with his best ever campaign. He batted over .300 for most of the first half and finished the season at .290. He also achieved career highs in nearly ever offensive category. The next year, he was selected to the All Star team and caught the ninth inning of the NL's 7-3 victory in San Diego. For the second time in three years, however, his season ended early, and he had surgery on a torn rotator cuff in his shoulder. The surgery caused him to miss nearly all of the 1979 season.

Pocoroba's injuries prevented him from becoming an everyday player again. He was tried at third base when Bob Horner was injured. He performed well in a substitute role batting a combined .271 in 1982-83. A highlight during this period was when the Braves won the NL West in 1982 and Biff had his only taste of postseason action. He was released in April 1984 after making only four pinch hitting appearances. In retirement, he started his own company Sausage World in Lilburn, Georgia.

Why I love this card
Goes without saying. This is one of the best names of the era. We would take turns putting our own musical interpretation on the name "Biff Pocoroba." He was our generation's Van Lingle Mungo.