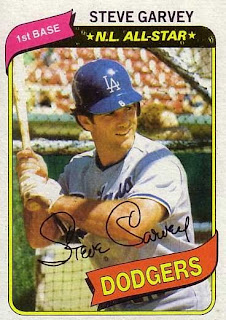 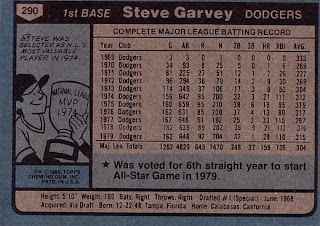 Who is this player?
Steve Garvey, first baseman, Los Angeles Dodgers
Iron Man. Popeye. Mister Dodger. By 1980, critics of Steve Garvey had been chipping away at the veneer of Garvey's public persona for some time. An article in the August issue of "Inside Sports" exposed issues in Garvey's private life and marriage. The couple engaged in a prolonged libel suit to prevent publication, but to no avail. The distraction seemingly didn't effect Garvey on the field. He was elected to start the All-Star Game in his home stadium, led the National League in hits (200), drove in 100 runs for the fifth time and batted over .300 for the seventh time. He played in every game, leading the Dodgers in a furious run at the NL West title against the Houston Astros. The Dodgers tied for the division lead on the last game game of the season before falling in a playoff.

Much of Steve Garvey's story is well known. His father was a bus driver for the Brooklyn/Los Angeles Dodgers in Spring Training when he young. This eventually led to a job as a batboy. Garvey was a high school standout and drafted by the Minnesota Twins, but he accepted a scholarship at Michigan State University. Steve played both baseball and football and excelled on the diamond under the tutelage of former major leaguer Danny Litwhiler. Garvey was drafted on the first round of 1968 amateur draft, which was one of the greatest drafts in sports history. In addition to Garvey, the Dodgers also drafted Bobby Valentine, Ron Cey, Joe Ferguson, Tom Paciorek and Doyle Alexander that summer.

This influx in young talent initially made it difficult for Garvey to find consistent playing time. It wasn't until he was stationed as the Dodgers' regular first baseman in 1973 that became one of the most consistent players of the decade. Garvey's breakout year came in 1974 when he was voted to the All-Star Game as a write-in candidate and was named the NL MVP. That season began a string were Garvey averaged 201 hits, 23 HR and 104 RBI for the next seven seasons. He was a perennial All-Star (named MVP of the game twice) and Gold Glove winner. The Dodgers made the World Series three times but were unable to clinch the championship.

The Dodgers finally broke through in 1981, winning the World Series over the Yankees with Garvey batting .417 in the six games. His production began to slip as the 1980s wore on and, with the Dodgers in the midst of a youth movement, Garvey was allowed to leave as a free agent after the 1982 season. He signed with the San Diego Padres and immediately provided legitimacy to the rising club. In San Diego, Garvey set the NL record for consecutive games played with 1207 and led the Padres to their first World Series in 1984. Garvey's dramatic game-winning home run in Game 4 of the NLCS turned the tide in the Padres favor, but they were unable to ride that momentum to a championship, losing to the Detroit Tigers.

Garvey set a record in 1984 playing in 193 consecutive errorless games and was an All-Star again in 1985, but his production was dwindling rapidly. He suffered an injury in 1987 and never played again, ending his 19-year career. Garvey alleged collusion played a role in the sudden end to his playing days and sued unsuccessfully in court. In the late-1980s, his public persona was shattered for good when he was named in several high profile paternity suits. He has since appeared in several informercials and is on the Board of Directors of the Baseball Assistance Team (B.A.T.)

Why I love this card
To me this card was a version of the old saying "Wait an hour before you go swimming." I wanted to like Garvey, I really did. Everything told me that I should; he had the stats, he was on a good team and he had the All-Star banner on this card. Look at the forearms, for crying out loud! However, like the saying, something told me to not entirely believe the hype. I respected Garvey but wasn't really a fan. And I didn't get cramps, either.

Something else....
Looking to establish an elite fighting force to take on Ninja mafia terrorists? Enlist the help of Steve Garvey! To be seen is to believe, here and here.

Garvey also had a 1980 Topps Super Card, below: 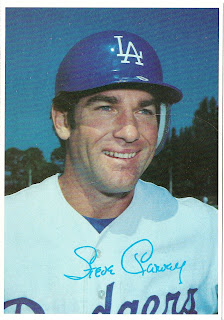 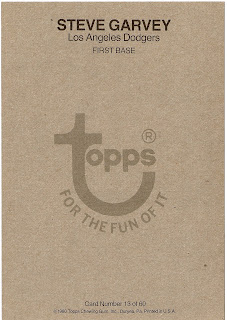