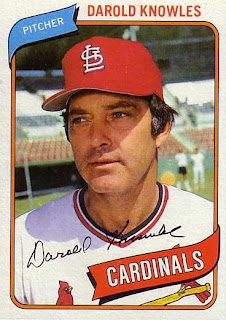 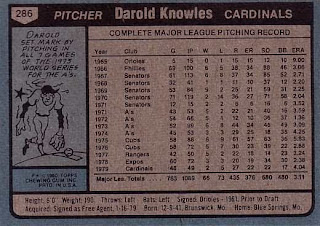 Who is this player?
Darold Knowles, relief pitcher, St. Louis Cardinals
After making the final cut in Spring Training, the 38-year old veteran Darold Knowles was hoping to get another season out of his well-used left arm. In only his second appearance, Knowles was treated rudely by the Pittsburgh Pirates, giving up a home run and a double and losing the game 12-10. Shortly thereafter, he was let go by the St. Louis Cardinals. Knowles did not appear in another game in 1980, and finished his 16-year career holding the record for most lifetime appearances by a lefthanded pitcher (765).

Best known for his time as one of Oakland's "Moustache Gang" of the 1970s, Darold Knowles was initially product of the University of Missouri. The Baltimore Orioles selected him as an amateur free agent in 1961 and he was a highly regarded prospect when he pitched a no-hitter in 1962 won 16 games with Elmira in the Eastern League the following year. After a brief appearance with the Orioles in 1965, Darold was traded to the Philadelphia Phillies. He spent only one year with the Phillies, finishing third in the National League in appearances and seventh in saves.

Traded to the Washington Senators in 1967, he was consistently one of the most durable and reliable pitchers in the baseball. Except for one year spent in the Air Force, Darold was consistently among the league leaders in appearances and saves. This workload earned him All Star recognition in 1969. Pitching in front of his hometown fans, Knowles worked the American League out of a jam in the third inning. He saved 64 games in a Washington uniform and posted a 2.46 ERA over his six seasons there.

When he was traded to the Oakland A's during the 1971 season it would prove to be the most successful run of Knowles' career. As setup man to Rollie Fingers, Knowles had an indispensable role with the A's as they won the World Series three consecutive years. Although he missed the 1972 season with a finger injury, he appeared in all seven games of the 1973 Classic, notching two saves and not allowing a run. No other pitcher before or since has replicated the feat of appearing in every game of a seven game set.

After his years in Oakland, Knowles became a journeyman, with stops with the Chicago Cubs, Montreal and finally in St. Louis. Like most players of his era, Knowles went into coaching when his career ended, with the Cardinals and the Philadelphia Phillies at the major league level. Most recently he was a pitching coach with the Dunedin Blue Jays. He also has a Facebook account with a friends ranging from George Brett to Casey Blake.

Why I love this card
The cartoon on the back was the first I had ever heard of Knowles' World Series feat. However, it always left me with the impression that Knowles didn't do as well as he did. Must be the squiggly arms and legs. Or the pained expression. Or maybe the really huge star.

Something else.....
Knowles' card is a DP variety, and it figures since I have four of these, but only one Don Baylor. We've also had a bit of a run lately of guys in their last season or last card. With Knowles, that makes five out of the last eight. I wonder if Topps knew something the rest of us didn't?

On this date in 1980:
The #1 song in the country on this date is "Funkytown" by Lipps, Inc. I'm having shivers just typing that.
Posted by Dean Family at 9:52 PM