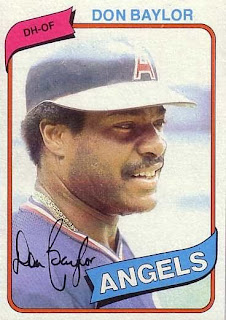 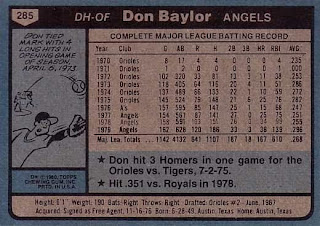 Who is this player?
Don Baylor, outfielder/DH, California Angels
The reigning American League MVP, Don Baylor had a frustrating season in 1980. Mirroring the fate of his team, Baylor broke a wrist in May and missed six weeks of action. When he returned, the Angels were mired in a deep losing streak and were in last place. Baylor likely pressed to turn things around and was unable to repeat the offensive heroics of 1979. His season came to an end when he was injured a second time, dislocating his toe in early September. Baylor finished the year batting .250 and managed only five home runs and 51 RBI.

Don Baylor's path to the major leagues was unique. He was one of the first students to integrate both his junior and senior high school in Texas during the early 1960s. He voluntarily crossed a wide racial barrier, not an easy task then, and the prejudices of the time were a consistent obstacle. The young Baylor was an outstanding athlete and he learned the resolve to accept and face a challenge. It was a quality that would serve him well as he worked his way towards a major league dream. He was recruited to play football at Texas, but Baylor's passion was baseball and he was selected number two by the Baltimore Orioles in the 1967 free agent draft.

In Baltimore, Baylor found a mentor and friend in Hall of Famer Frank Robinson. Baylor closely observed and emulated Robinson's style of play and leadership. The Orioles were a perennial contender and had a deep farm system, so despite being named Minor League Player of the Year in 1970, Baylor had difficulty finding playing time. He made the big leagues for good in 1972 and stayed in the Oriole lineup for five years, showing an impressive combination of power and speed. Although it looked as if he would be an Oriole for some time, he was part of a multi-player package to the Oakland A's for Reggie Jackson.

After a year in Oakland, Baylor was one of the first free agents and signed an eye-popping contract with the California Angels before the 1977 season. Despite early struggles, Baylor had a career year in 1979, leading the Angels to their first postseason appearance. In being named the AL MVP, Don hit 36 home runs and led the league in runs, games played and RBI. Baylor would spend six seasons in Anaheim, and when he left after the 1982 season, he was the franchise leader in several categories.

He went to the New York Yankees in 1983 and then to the Boston Red Sox in 1986. In the last three years of his 19-year career, Baylor appeared in the World Series each year, each time with a different team (Boston, Minnesota, and then Oakland). He retired after the 1988 season and began a second career as a coach. He finished his playing career as the all-time leader in being hit by a pitch (267) a record now held by Craig Biggio.

Baylor was the first manager of the Colorado Rockies in 1993 and was only the fifth black to manage a major league club. He led the Rockies to the postseason in 1995 and was named NL Manager of the Year. By 1997, the Rockies under Baylor's leadership had the best five-year record (363-384) of any expansion club in MLB history. He managed the Chicago Cubs in the early 2000s and returned to Colorado in 2009 where today serves as the club's hitting coach.

Why I love this card
Actually, this card irritated me for a long time. Baylor started the 1979 All Star Game in Seattle when Rod Carew was injured and Carl Yaztremski shifted over to first base. Baylor was the MVP and had another card in this set to recognize his RBIs. I know that it was Topps' practice to designate as All-Stars the guys who won the voting, but I always felt Baylor got rooked. Now, inspired by recent posts regarding customized cards, here is my attempt to recognize Baylor: 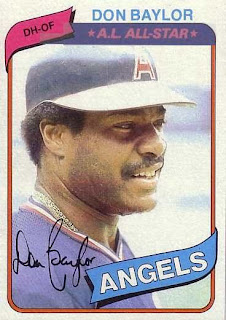 Something else....
Baylor also had a 1980 Super Card. Here it is below. I remember my original one getting ruined with a Slurpee at some point. 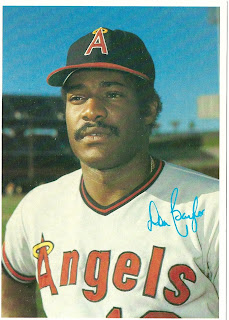 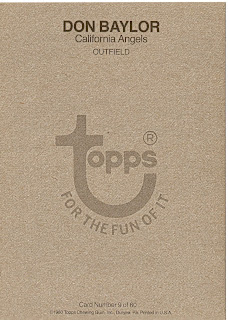 On this date in 1980:
Scott Hairston, currently with the San Diego Padres and son of former major leaguer Jerry Hairston is born.
Posted by Dean Family at 9:53 PM