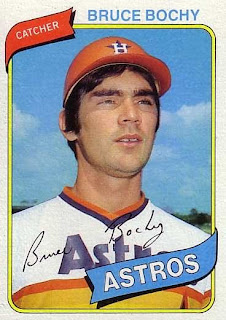 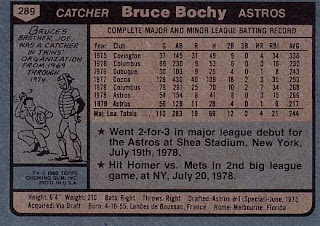 Who is this player?
Bruce Bochy, reserve catcher, Houston Astros
Now the skipper of the San Francisco Giants, when this card was new in 1980 Bruce Bochy was the backup catcher on the NL West Champion Houston Astros. He appeared in 22 games during the season, doing a fine job in relief of the injured Astro catchers. Known more for his defense than bat, Bochy had a strong and accurate throwing arm. He saw action in the NLCS against the Phillies, appearing in Game 4 and lining out in his only at-bat.

Born Landes de Boussac, France, Bruce Bochy is The son of a US Army officer and raised in Virigina and later Florida. He attended Florida State University, was drafted on the 1st round by the Houston Astros out of Brevard Community College in 1975. He made his major league debut in less than three years, getting two hits off of Craig Swan in his first game against the New York Mets. The following day, he homered off of Mets' starter Kevin Kobel. Despite such an impressive start, Bochy never appeared in more than 63 games in any one year over his nine-year career.

After splitting time between the minor leagues and Houston, the Astros traded him to the New York Mets. He spent only one year in New York, traded again to the San Diego Padres in 1983. Bochy spent five years in San Diego, where he was a popular player, despite his lack of playing time. He singled in his only World Series appearance in 1984 and enjoyed his best season in 1986, setting personal bests in home-runs, RBI, and games played. He finished his career throwing out 28.6% of enemy baserunners and guided pitchers to a career 3.87 ERA in 298 games behind the plate. His 26 career homers are the most by any player born in France.

Upon his retirement as a player, Bochy began the second phase of his baseball career, also with the Padres. First working his way up through the minor leagues, he won three minor league championships before being promoted to the Padres' coaching staff in 1993. He was given the managerial post in 1995 and was the only former Padre to be the team's manager. Bochy simply became the best manager in Padre history, winning Manager of the Year twice and leading the Padres to three NL West titles and four postseason appearances. Bochy was at the helm when the Padres advanced to their second World Series, in 1998, a unfortunate loss to the New York Yankees.

Bochy has earned a well-deserved reputation as a straightforward manager that has made the most out of a ballclubs abilities. After 12 seasons in San Diego, Bochy left to accept the same position with the San Francisco Giants in 2007. Bruce is currently 7th among active big league managers for wins, and is 39th on all-time list. He is the all-time leader for most wins by a manager born outside of the United States (passing Felipe Alou).

Why I love this card
I remember some of the older kids having discussions about what players would eventually become managers. Some of the talk centered around Joe Morgan, Pete Rose, maybe even Rod Carew or George Brett. It never entered my mind at the time that a guy like Bochy are typically the kind of player that becomes the most successful manager. I think the only thing that jumped out at me then was "I really want to get an Astros helmet."

Something else....
Bochy is known for having one of the largest cap sizes in Major League Baseball at 8 3/4. Also, as a teen, he worked in a furniture-refinishing shop, where a chemical reaction permanently added a blonde hue to the eyelashes over his right eye. I can't see it on this card.

On this date in 1980:
Vernon Jordan is shot and critically injured in an assassination attempt in Fort Wayne, Indiana by Joseph Paul Franklin. Franklin says he shot and seriously wounded the civil rights activist and Urban League president after seeing him with a white woman in Fort Wayne, Indiana. Franklin initially denied any part in the crime and was acquitted, but later confessed.
Posted by Dean Family at 6:00 PM