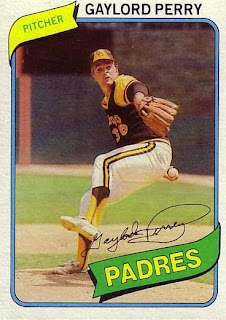 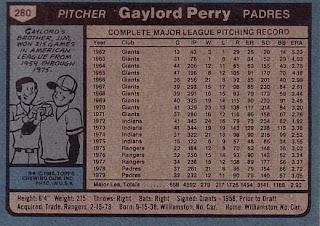 Who is this player?
Gaylord Perry, starting pitcher, San Diego Padres
Hall of Fame, Class of 1991
Fresh from organizing his exit from the San Diego Padres, Gaylord Perry began the 1980 season returning to the Texas Rangers. At the time this card was issued, Perry led all active pitchers in victories and strikeouts. Perry started the season well, winning three of his first four decisions as Texas made an early run to the AL West lead. However, he slumped after that, losing five in a row. The Rangers traded him to the New York Yankees in August for the stretch drive. He won four games as the Yankees clinched the AL East. Gaylord did not appear in the ALCS and when the season ended, he was not offered a Yankee contract for 1981.

Spitball. The word and Gaylord Perry have become synonomous. However, that wasn't always the case. Signed by the San Francisco Giants with a whopping (at the time) $85,000 bonus, Perry was a fireballing righthand prospect that was being groomed to join Juan Marichal in the Giant rotation. While he struggled initially, Perry had a breakout season in 1966, when he began the season 20-2 and was named an All-Star. He slumped the rest of the way, but it was clear that Perry would be a force for some time. He also began to use the spitball from time to time, a pitch he claimed he learned from fellow pitcher Bob Shaw in 1964.

Perry would spend ten seasons in a Giant uniform, pitching a no-hitter in 1968 and leading San Francisco to the NL West title in 1971. He won 20 games twice, including a league high 23 in 1970 and was consistently among the league leaders in innings pitched. However, he was involved in a blockbuster trade with the Cleveland Indians and promptly won the 1972 AL Cy Young Award with a career-high 24 wins and posting a 1.92 ERA. It was also as an Indian that Perry cemented his reputation for throwing illegal pitches with a variety of motions and movements designed to psyche out opposing batters. This reached its height in 1974 when Perry released his autobiography "Me And The Spitter."

Tension between Perry and new manager Frank Robinson led to a trade to the Texas Rangers in 1975 and Gaylord spent the remainder of his 22-year career without spending more than three seasons with any one team. That era was not without highlights; another Cy Young Award with the San Diego Padres in 1978; winning his 300th game with the Seattle Mariners in 1982; and being featured on the cover of Sports Illustrated. He finished his career with the Kansas City Royals in 1983 and upon his retirement he was the only man to win a Cy Young Award in both leagues, was fourth on the all-time strikeout list and held the record for most consecutive 15+ win seasons (13 - since broken).

Perry experienced his share of tragedy after his playing days, first with the bankruptcy of his farm in 1986 and then the death of his wife in a car accident in 1987. The Hall of Fame came calling in 1991, his third year of eligibility. He has been a fixture at Hall of Fame and "Old-Timer" events and on the card show circuit, often appearing in his trademark jersey that featured every team he played for. He was nominated a finalist on the All Century Team in 1999, had his number retired by the Giants in 2005 and last year was inducted into the Bay Area Hall of Fame.

Why I love this card
Like Phil Niekro, Gaylord Perry was one of those guys that were older than my Dad. By the time I got this card that year, Perry was with the Yankees and I remember wondering if I would ever see a card of him with the Rangers (again). Thanks to OPC, one was created here: 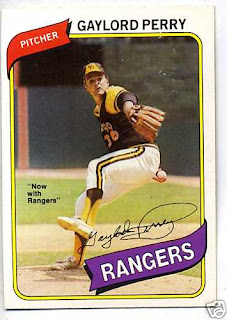 Something else....
Alvin Dark, Perry's manager in San Francisco said to a sportswriter in 1962 that a "man would land on the moon before he hit a home run." Indeed a little more than an hour after Apollo 11 landed on the moon in 1969, Perry indeed hit the first home run of his big league career. Perry would hit six home runs in all during his career, the final one in 1981 as a member of the Atlanta Braves.

On this date in 1980:
Perry pitches seven innings for the Rangers in a 12-inning loss against the California Angels in Arlington. Perry strikes out eight Angel batters, but the hero is Todd Cruz who doubled home Rod Carew with the go-ahead run in the top of the 12th.
Posted by Dean Family at 10:53 PM

Labels: (Hall of Fame), (On this date), San Diego Padres