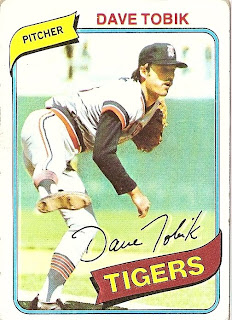 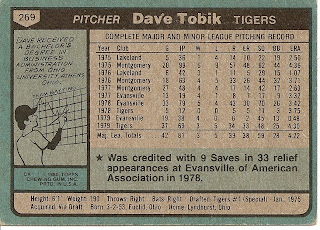 Who is this player?
Dave Tobik, relief pitcher, Detroit Tigers
Ineffective out of the bullpen for the first two months of the 1980 season, Dave Tobik found himself in Triple-A Evansville for most of the summer. Given the role of long reliever, Tobik was scored upon in his first eight appearances and had a 6.04 ERA at the time of his demotion. He returned to the parent club in September and posted a 2.20 ERA in seven appearances. He made his first start the final weekend of the season against the division champion New York Yankees and earned the victory. Tobik's performance likely saved his Tiger career and earned strong consideration for 1981.

A collegiate standout at Ohio University, Tobik was an All-Mid-American Conference pitcher from 1971-74. He tied for the national college pitching title in 1974 when he recorded an 0.84 earned-run average and was selected by the Detroit Tigers in 1975. Groomed mainly as a relief pitcher, Tobik worked his way through the Tiger organization relying mainly on a forkball and palmball. After a successful season at Evansville in 1978, Tobik earned a look with Detroit near the end of the season. After a poor Spring Training in 1979, he began the season in the minor leagues but was recalled in late-May.

He was given an opportunity to finish games with the Tigers occasionally earning a save along the way. Dave turned in a decent season as a setup man to closer Aurelio Lopez and was a pleasant surprise in 1981 in that role with a 2.69 ERA in 27 appearances. When injuries decimated the Tiger bullpen in 1982, Tobik was thrust into the role of closer with mixed results. His manager, Sparky Anderson, fumed to the press after Tobik turned in a poor Spring Training in 1983 and he was traded to the Texas Rangers for outfielder Johnny Grubb.

Tobik pitched two seasons in Arlington appearing in 51 games; all in relief. He saved 14 games over two seasons with the Rangers who finished last in the AL West in 1984. As the Rangers began to rebuild, Tobik was granted free agency and he caught on with the Seattle Mariners in 1985. He pitched poorly in eight games and spent the majority of the year with Triple-A Calgary. It would be the last season of Tobik's career, eight in all.

He was inducted into the Ohio University Hall of Fame in 1989 and spent time working in management for Five Star Temporaries in St. Louis. His wife works for the St. Louis Post-Dispatch and his son was a top baseball recruit for the University of Tennessee at Martin. Tobik today lives in a suburb of St. Louis, Missouri.

Why I love this card
The Tigers team set was a difficult one for me to nail down during 1980. Mark Wagner, especially was a hard one to come by (go figure), but I had no such problem with Tobik. I had three Tobiks; one for the team set and one for the top and bottom of pile of 1980 Tiger cards. Invariably, the other two would catch the wrath of rubber bands and other general wear and it is one of those cards that you see here.

Something else....
Tobik allowed Wade Boggs' first career home run. Apparently, he is also responsible for this. Had Tobik not allowed a game-winning home run to Doug DeCinces, it is likely that this song would never have seen the light of day.

On this date in 1980:
Two future Hall of Famers have memorable days:
Ferguson Jenkins of the Texas Rangers becomes the fourth pitcher in major league history to win 100 or more games in each league. Jenkins joins Cy Young, Jim Bunning and Gaylord Perry in the exclusive club.
Willie McCovey of the San Francisco Giants hits his 521th and final career home run against the Montreal Expos, helping the Giants to a 3 - 2 win. His shot ties him with Ted Williams on the all-time list.
Posted by Dean Family at 8:57 PM