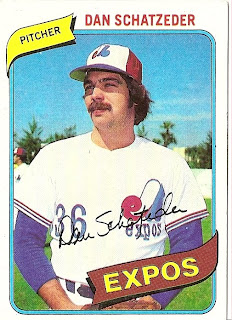 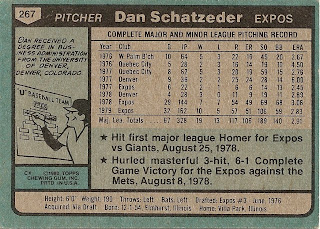 Who is this player?
Dan Schatzeder, starting pitcher, Montreal Expos
As the 1980 season began, Dan Schatzeder was no longer wearing the colors of the Montreal Expos. Having been traded to the Detroit for Ron LeFlore during the off-season, the Tiger hopeful were counting on Schatzeder to be the #2 pitcher in the rotation. Dan lost his first three decisions of 1980 and looked unimpressive in doing so. He went on the disabled list and struggled to get his record to .500. Dan hit a groove late in the season, winning five and completing six.

Fresh off the campus of the University of Denver, Dan Schatzeder was considered one of the Montreal Expos' top pitching prospects after he signed with them in 1976. Within a year, the lefthander had made his major league debut, embarking on a 15-year career that saw him spend time with nine different major league clubs. His rise to the majors coincided with the Expos challenge in the NL East and he was a major contributor to the club in 1979. He won 10 games with a 2.83 ERA as the Expos were narrowly edged by the Pirates on the final weekend. Montreal reluctantly parted with Dan in exchange for LeFlore, a former All-Star, in a move they thought would lead them to the post-season.

Schatzeder struggled again with the Tigers in 1981 and he was traded to the Giants. Used mainly in relief, Dan found a role that he would settle into for the remainder of his career. A reliable and durable pitcher, Dan adapted to many relief roles, as spot starter, setup man and occasional closer. An excellent athlete, Schatzeder would also be called upon to pinch-hit. In 1986, he banged out six pinch-hits, the most by a pitcher in nearly 30 years.

He reached the pinnacle of his career in 1987 as a member of the Minnesota Twins. As the Cinderella Twins reached the postseason, Schatzeder was part of an effective, if unheralded bullpen corps. He was unscored upon in two ALCS appearances against his former team the Tigers, and earned a victory in Game 6 of the World Series against the Cardinals. Minnesota would win the Series in seven games.

After winning the World Series, Schatzeder bounced around during the last four seasons of his career, playing for five different teams. In retirement, he was a pitching coach for Aurora University in Illinois and had a bobble head made in his likeness on the 20th anniversary of the Twins World Series win
Schatzeder is now a physical fitness teacher and football coach at Waubonsie Valley High School in Aurora, Illinois.

Why I love this card
In 1980, I liked Schatzeder when he was with the Tigers. To put it more accurately, I felt sorry for Schatzeder when he was with the Tigers. Ron LeFlore was a popular player and I always thought it was unfair that the fans somehow blamed him for Ron's departure. The kids at school made fun of his name (I seem to remember Shitzeder as a popular derivative) but I was too intimated to say anything. I would like to say that when the Twins beat the Tigers in the '87 ALCS, I respected Schatzeder enough to soften the blow of defeat. I would be lying. I'm still not over that ALCS, Schatzeder or not.

Something else....
Below is a photo of Schatzeder's OPC card from 1980 with the Tigers flag at the bottom. I would have freaked had I saw this card then and it would have been a popular card in the neighborhood, Ron LeFlore or not. 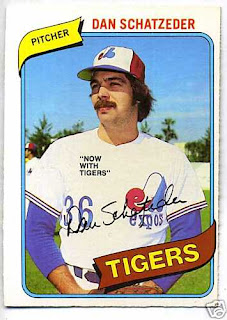 On this date in 1980:
Bill Madlock of the Pittsburgh Pirates receives a 15-game suspension and a $5,000 fine for hitting umpire Jerry Crawford in the face with his glove during a recent game. Madlock will appeal the suspension and continue playing until June 6, when he decides to withdraw his protest.
Posted by Dean Family at 9:23 PM