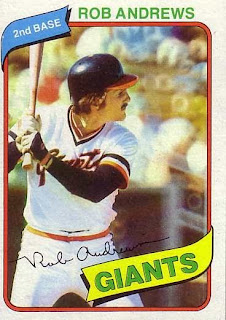 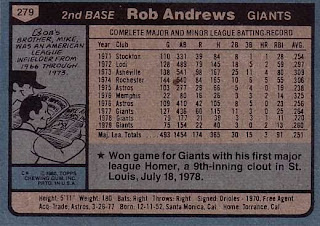 Who is this player?
Rob Andrews, second baseman, San Francisco Giants
After being released by the Giants at the end of the 1979 season, Rob Andrews signed a contract to begin 1980 with the New York Mets. However, an injured knee proved to be a problem and he instead retired, bringing to an end his five-year major league career. As this card was being pulled from packs across America that summer, Rob was teaching Sunday school at King's Valley Christian School in his hometown of Concord, California.

The younger brother of infielder Mike Andrews, Rob followed his brother to the major leagues. Upon his graduation from high school, Rob signed a contract with the Baltimore Orioles when they selected him on the 10th round of the 1970 amateur draft. He quickly gained a reputation as a speedy base runner and good glove man. Rob was named an All Star in the International League in 1974 after being among the league leaders in steals and batting over .300. When the season ended, he was the key prospect in a trade to the Houston Astros for slugger Lee May.

Andrews earned the second baseman's job for the Astros and was their Opening Day starter in 1975. He got a hit off of future Hall of Famer Phil Niekro and followed that with a hit in his first five games. He tailed off at the plate after that, finishing the season with a .238 average. However, his fielding prowess was recognized by his teammates, who began calling him "Rock" for his ability at the keystone. Houston traded Andrews to the San Francisco Giants shortly before the start of the 1977 season.

He played in a career-high 127 games and posted his best average (.264) with the Giants in 1977. However, when San Francisco obtained Bill Madlock the following year, Madlock was moved to second base in an attempt to get more offense in the lineup and Andrews was relegated to the bench. He hit three home runs in his career and all were memorable; a nationally televised game-winner on Monday Night Baseball against St. Louis and a two-homer performance in 1979 against future Hall of Famer Tom Seaver.

Away from the game, Andrews initially returned to school to become an elementary school teacher like his wife. He the interim, he opened a summer baseball camp in his native California and soon the camp would host 1,800 youngsters from the Bay Area. The camp became a full-time business and has been in operation for over 25 years. The success of the camp caught the attention of his former team, the Giants, who in 1997 asked him to organize and supervise fantasy baseball camps for adults. Andrews is involved in several charitable organization and local civic causes in his community.


Why I love this card
When I was in Little League, the coaches were forever instructing us to "choke up!" Seeing Andrews on this card legitimized that major leaguers did it too. Also, bonus points for a game action photo of Andrews instead of opting for the posed variety. I have been hard on Topps the last two posts for being a tad lazy, so kudos to them for this shot, even if it is inexplicably off center.

Something else....
Some of the instructors at Rob Andrews' Baseball Camp include former A's infielder Wayne Gross and Cincinnati Reds pitcher Brad "The Animal" Lesley. I'm sure that Lesley is a great instructor, but I cannot get out of my head the scene from Little Big League with Lesley as John "Blackout" Gatling. "GOOOO AWAY!!!"

On this date in 1980:
Mt. St. Helen's in Washington state erupted. For those of you old enough to have been around at this time, you can recall how enormous this event was. It was the deadliest and most destructive volcanic event in the history of the United States. 57 people were killed; 250 homes, 47 bridges, 15 miles of railways, and 185 miles of highway were destroyed. You can watch a clip from CBS News here.
Posted by Dean Family at 5:44 PM