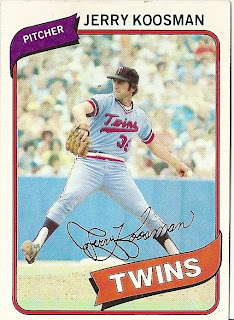 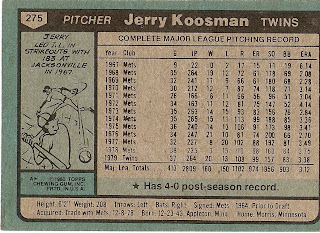 Who is this player?

Jerry Koosman, starting pitcher, Minnesota Twins
After many seasons as a New York Met, Jerry Koosman was beginning his second season as ace of the Minnesota Twins' pitching staff in 1980. At 37 years old, Koosman began to show some signs of wear. Although he was still very durable (243 IP, 8 CG) his ERA for the season finished over 4.00 for the first time in eight years. Koosman was a popular player for the Twins who seemed to be trading away nearly anyone of value during this era. His most memorable game of 1980 is likely a masterful 10-inning, 3-hit win over the eventual AL East champion New York Yankees.

Born Jerome Martin Koosman, Jerry is a proud native of Appleton, Minnesota and graduate of West Central School of Agriculture. He was essentially discovered during his time in the army at Ft. Bliss, Texas. The son of an usher at the Polo Grounds told his father about Koosman who was on his army baseball team. The father told the Mets about Koosman, and he was signed upon his discharge in 1964. When he struggled initially in the minors, the Mets were about the release him when the farm director requested Koosman be retained at least until his first payday as he owed the Mets money they had wired him after his car broke down en-route to spring training.

It was the break that saved Koosman's career. He jumped from Single-A to Triple-A in one season and led the International League in strikeouts in 1967. He was inserted into the Mets rotation in 1968 and began the season with consecutive shutouts. In that rookie year, he won 19 games, was named an All-Star, fashioned a 2.08 ERA, finished fifth in complete games and tenth in strikeouts. Yet Koosman was not named Rookie of the Year. He was edged out for the award by future Hall of Famer, Johnny Bench. "The Kooz" was the oft-forgotten third man in the triumvirate of young hurlers (Tom Seaver/Nolan Ryan) who came up with the Mets in the 1960s.

Yet Koosman was one of the keys to the Miracle Mets of 1969. Again an All-Star, Koosman won two games in the World Series, including the clincher in Game 5. His heroics on the mound would place him on the cover of Life magazine. He also won two games in the 1973 postseason, Game 3 of the NLCS that featured the Bud Harrleson-Pete Rose fight as well as Game 5 of the World Series. As the Mets fell from the heights of pennant contender, Koosman was particularly effected, as he was 11-35 over a two year span.

This led Koosman to request a trade and he was sent to his hometown Twins. The Twins promptly traded him to the White Sox during the 1981 season and he appeared in the postseason again with Chicago in 1983. He returned to the National League with the Phillies for two seasons (1984-1985) before retiring at the age of 42 after 19 major league seasons. Currently, Koosman is in the Duluth Federal Prison in Minnesota for tax evasion. Court records show Koosman failed to pay Federal income taxes for 2002, 2003 and 2004. In September 2009, he was sentenced and he is scheduled to be released in June 2010.

Why I love this card
Koosman was the starting pitcher for the Twins at the first game I ever saw live. I went with my Dad, my buddy Looie and his father. Looie's family had just moved onto the block 18 months prior from Flushing, New York and were huge Mets fans. All I heard about was how great Koosman was. It was the first time I had ever heard about the Miracle Mets and 1969. When I got this card later that summer, I knew that I had to keep it.

Something else....
Koosman and Nolan Ryan share the same rookie card in the 1968 Topps set. I still rue the day I didn't buy that card in 1989 for $50. It was in my hands!! Koosman also gave up Pete Rose's 4000th hit when Rose was with the Montreal Expos (remember that?). Finally, Koosman had a 1980 Burger King card that is very similar to the 1980 base set card, except that this photo shows more of the background. 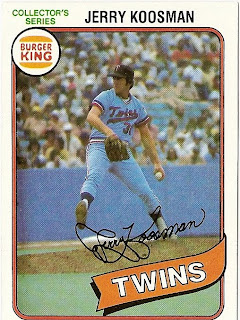 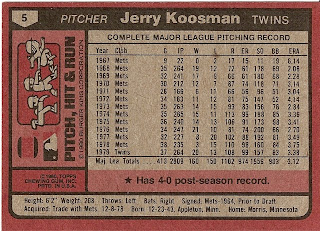 On this date in 1980:
Mobster Henry Hill is arrested for drug possession. His story is told in the movie "Goodfellas." You can watch the scene here.
Posted by Dean Family at 10:30 PM