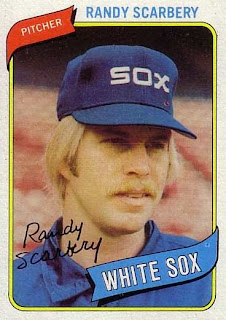 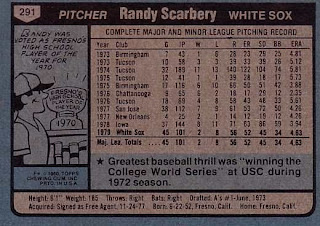 Who is this player?
Randy Scarbery, relief pitcher, Chicago White Sox
After leading the Chicago White Sox in appearances in 1979, things did not go as well for Randy Scarberry in 1980. When allowed three earned runs in his first appearance, and when April ended, his ERA was well over 5.00. He pitched in ten more games during May and began to get into a groove, allowing seven runs in 18.2 innings. To his surprise, he was sent to the minor leagues and then traded to the California Angels for infielder Todd Cruz. Randy never again made a appearance in a major league game, drawing the curtain on his brief two-year career.

A native of Fresno, California, Randy Scarbery was the first player selected twice in the first round of the amateur draft when Houston Astros selected him in 1970. He turned down an $86,000 bonus, choosing college instead, and was a standout at USC, a collegiate baseball powerhouse. The Trojans won the College World Series every year that Scarbery was on on the team, and he led the nation with 15 victories in 1973. He was drafted in the first round in 1973 by the current World Champion Oakland Athletics.

He immediately debuted at the Triple-A level, and although he sometimes struggled, he was often among the Pacific Coast League leaders in innings and starts. After three seasons in the Oakland organization, he was traded to the St. Louis Cardinals in April 1977 for fellow prospect Steve Dunning. He was granted free agency at the end of the season and signed on with the Chicago White Sox.

In Chicago he would finally break through and make the major league roster. He made his major league debut in April of 1979 and spent most of his rookie season coming out of the bullpen. He was used in virtually all roles, periodically used as a closer, long relief, and was even given five starting assignments. He finished his first season with a 2-8 record and a 4.62 ERA.

Scarbery didn't pitch anywhere after the 1980 season and I could not find any information on his whereabouts or activities post-baseball. Any information would be most appreciated.

Why I love this card
I loved the cartoons like the one depicted on the back of Scarbery's card. I always wanted to earn a trophy like that. The ones that I had always had a little baseball player on it and the bat always broke off.

Something else....
I found a little clip of Scarbery (along with several White Sox teammates) in Spring Training that you can find here.

On this date in 1980:
Ken Landreaux of the Minnesota Twins goes 0-for-4 in an 11 - 1 loss to the Baltimore Orioles, ending his hitting streak at 31 consecutive games, the longest streak in the American League since Dom DiMaggio hit safely in 34 games in a row in 1949.
Posted by Dean Family at 8:52 PM